Too Many Headers 'Damage Brain' 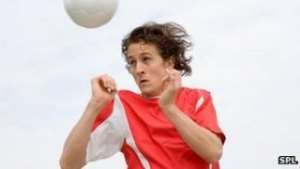 Frequently heading a football can lead to brain injury, warn doctors who say they have found proof on brain scans.

Imaging of 32 keen amateur players revealed patterns of damage similar to that seen in patients with concussion.

There appears to be a safe cut off level of 1,000 or fewer headers a year below which no harm will be done, but the US investigators say more work is needed to confirm this.

Heading is believed to have killed the English footballer Jeff Astle.

Astle, 59, who died in 2002, developed cognitive problems after years of playing for England and West Bromwich Albion.

The coroner ruled that his death resulted from a degenerative brain disease caused by heading heavy leather footballs.

Repeated trauma
Although the balls used to play soccer today are much lighter than those used in the 1960s when Astle was playing, they can still pack a punch, says lead researcher Dr Michael Lipton of Montefiore Medical Center, the university hospital for the Albert Einstein College of Medicine.

Footballs can travel at speeds as high as 34 miles per hour during recreational play and more than double that during professional play.

However, others doubt that the force exerted by the ball would be enough to cause damage.

Dr Lipton's team set out to determine what impact on the head repeated contact with the ball might have.

They used a special type of brain scan known as diffusion tensor imaging, which is good for visualising nerve and brain tissue.

The 32 volunteers who underwent the scans were asked to say how often they headed the ball during football training and play.

This revealed that players who were 'frequent headers' had obvious signs of mild traumatic brain injury on their scans.

Five brain regions were damaged - areas in the front of the brain and towards the back of the skull where processes like attention, memory, executive functioning and higher-order visual functions take place.

The researchers believe the injuries build up over time.

Cumulative damage
Dr Lipton, who presented his findings at the annual meeting of the Radiological Society of North America, said: 'Heading a soccer ball is not an impact of a magnitude that will lacerate nerve fibres in the brain.

'But repetitive heading could set off a cascade of responses that can lead to degeneration of brain cells.'

The damage only occurred in players who said they headed the ball at least 1,000 times in a year. Although this might sound like a lot, it amounts to a few times a day for a regular player, say the researchers.

They recommend further studies to confirm what is a safe amount so that footballers could be advised on this.

Dr Andrew Rutherford from the School of Psychology at Keele University has been researching the possible damage caused by heading for several years. He says he is yet to be convinced by the evidence so far.

He suspects that researchers are looking at the wrong thing. He believes most head trauma seen in football is due to players clashing heads when they are going for a header, rather than contact with the ball itself.