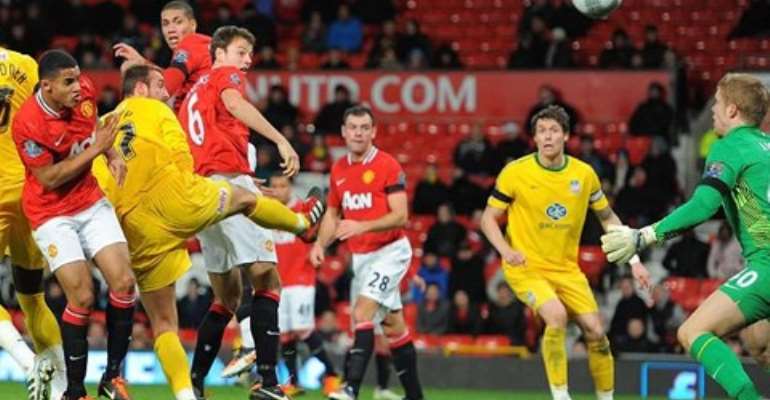 Crystal Palace feared their story was over altogether two years ago.

Yet last night at Old Trafford, Glenn Murray helped to write a page in their history which will be read as fondly as any by their faithful fans.

One that would have seemed but a fairytale when the administrators arrived back in January 2010 and the club looked set to fold.

But they survived and here enjoyed a moment that only football can provide for the beleaguered fan who continues to dream.

Who among the 5,000 travelling faithful last night will ever forget Darren Ambrose's stunning opener?

And the moment when, in the eighth minute of extra time, Murray stooped to head the winner from close range?

A moment that wiped away all the pain of recent years as the club booked their first cup semi-final in 10 years.

A money-spinning two-legged semi that will be played against fellow Championship side Cardiff.

So what a chance now for Dougie Freedman's men — and what a journey this club has been on.

The winner came from Ambrose.
Last season, their existence in the second tier was confirmed with just three games to go.

But now they are sitting comfortably in mid-table and looking up with optimism.

There were tears in the directors box and in the Palace end at this result and you can understand the emotion.

When you come to Old Trafford and play any side Alex Ferguson puts out, you know you are up against it.

When you play one which is stronger than you expected, with NINE internationals, you really are struggling.

But Palace showed no fear, showed more enterprise and quite simply wanted it more.

That, as much as anything, will annoy United boss Fergie.

He watched established players perform as if victory was their right rather than something they had to work for.

There was one moment in the first half that rather summed it up.

Dimitar Berbatov was about 10 yards from Ji-Sung Park — under no pressure — and found an opponent rather than his team-mate.

The Bulgarian went off at the break and left the ground with a foot in a cast.

He was lucky he did not leave with a foot up his backside.

But he was not the only one well below par.
At least some of the youngsters, like Ravel Morrison, showed a bit of skill and enthusiasm.

It was not enough, though, as Palace were bursting with it.

Not least 18-year-old Wilfried Zaha, a product of the club's youth system and an undoubted star of the future.

He provided much of their attacking thrust throughout.

But it was a relative veteran in midfielder Ambrose, 27, who provided the incredible opener having come on at half-time.

Zaha cut in from the right and fed the ball to the ex-Charlton and Newcastle man.

Ambrose then took a couple of touches before unleashing a 35-yard shot that had power and a vicious swerve, the latter of which took the ball away from Ben Amos' outstretched hand and into the top corner.

It had been eight hours and 43 minutes since Palace had scored their last goal and it is fair to say it was worth the wait for the Eagles faithful, who exploded into a mass of arm-waving joy.

Quantcast
Joy that would, however, be shortlived for within three minutes United were level from the penalty spot.

The Palace fans were furious with the award but, when they see it again, they will understand why.

It was not just a slight tug either and the Italian went down in a heap.

A spot-kick was duly given and Macheda picked himself up to put it away.

Palace did not wilt and in the last minute of normal time, when sub Murray rippled the side-netting, some thought they had won it.

Into extra time it went and United looked well and truly spent while Palace seemed to find a new lease of life.

A foul by Park on Zaha gave the visitors a free-kick wide outside the box.

The trusty boot of Ambrose fired the ball over and striker Murray got between two United players to head home from close range.

The predictable late flurry from United came but it was halfhearted.

Palace would have their day — and what a day.