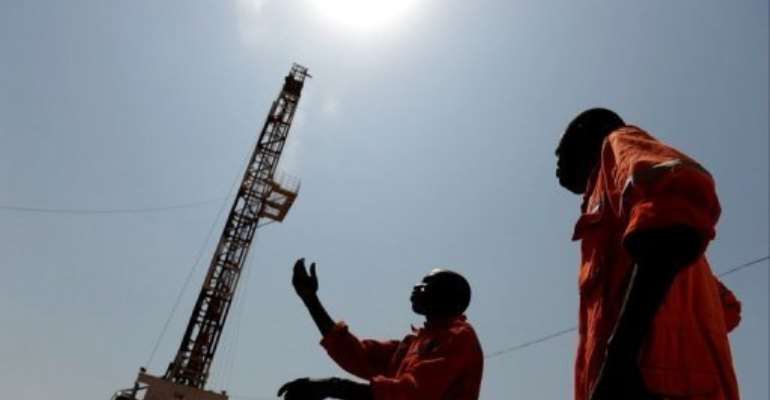 KHARTOUM (AFP) - Sudan will take 23 percent of the south's vital oil exports as payment in kind, after talks in Addis Ababa failed, but will not block Juba's exports, Sudanese officials said on Wednesday.

"In the interim period, we are not going to charge the full fee. We will deduct about 23 percent as payment in kind," a senior oil ministry official told AFP, speaking on condition of anonymity.

Khartoum and Juba are locked in a bitter row over how much the landlocked south, which won independence in July and produces some 75 percent of the country's 450,000 barrels per day of oil, owes to use the north's infrastructure.

The Sudanese government pledged in a statement earlier not to block southern exports.

"The Government of Sudan has not, and will not, stop or impede the flow and export of the Republic of South Sudan," it said, after five days of negotiations in the Ethiopian capital ended in deadlock.

But Sudan's unilateral decision to syphon off southern crude is likely to heighten tensions, with the south's chief negotiator, Pagan Amum, threatening to take legal action if the north "steals" its oil.

"If the GOS (government of Sudan) does steal South Sudan oil, or if others try to purchase the south's stolen oil from the GOS, the Republic of South Sudan will take all legal measures necessary," he said in a statement.

He accused Khartoum of taking the south's oil revenues for May, June, and July.

Sudan's oil ministry said on Monday that it had blocked southern exports, claiming then that the Juba government had failed to pay transit fees of $727 million covering the period from July until the end of October.

The announcement provoked a hostile response from Juba, and the escalating dispute prompted China, the largest foreign investor and main buyer of Sudanese oil, to urge both sides to "exercise restraint" in their negotiations.

Khartoum's chief negotiator on economic issues, Sabir Mohamed Hassan, after returning from the African Union-brokered talks in Ethiopia, emphasised that southern exports would be allowed to continue.

But he said the failure of the south to pay its fees was aggravating the economic difficulties facing the north.

"We have told them that we have a responsibility to take our dues in kind, and that is exactly what has happened in the past few days," he told reporters.

Underlining the lack of progress on this increasingly rancorous issue, Hassan said Khartoum was looking to charge the south $36 per barrel for the use of its oil infrastructure, in contrast to Juba's proposal of 70 cents.

"This is extortionate to us. It's discriminatory and it's not based on a cost principle," he said on his return from the negotiations.

The south says it will have to shut in its oil production next week if Khartoum prevents southern oil cargoes from lifting, due to a lack of storage facilities at the Port Sudan export terminal.

"If by December 6 there is no lifting, then we will have to shut down production," oil ministry undersecretary Machar Aciek said.

Both countries depend heavily on their oil revenues, which make up some 98 percent of the Juba government's income, and provided 90 percent of Sudan's hard currency earnings before partition, causing its currency to devaluate sharply since July.

Southern officials have repeatedly discussed building an alternative export pipeline, probably through Kenya, but experts say this is not commercially feasible unless big new discoveries are made.

Oil is one of a number of sensitive issues, including border demarcation, debt and the future status of the contested Abyei region, that the two sides failed to resolve ahead of the south's secession.

Analysts warn that the longer they fail to strike an agreement, the more difficult the negotiations are likely to become.

The next round of oil talks is due to take place in Juba on December 20.