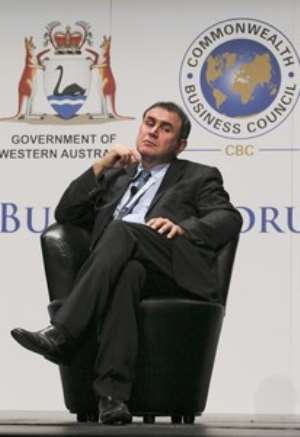 “It's not even a theory; it is a theology.” So Nouriel Roubini, with his best Strangelovian inflection, describes the gold standard to Yahoo Finance's The Daily Ticker, and in doing so displays shocking ignorance of the gold standard and either the work of Ben Bernanke or a presumption that the rest of the world is ignorant.

In slurring supporters of gold as “lunatics and hacks,” Roubini falls into lockstep with other leading defenders of the status quo: Prof. Barry Eichengreen in “A Critique Of Pure Gold” in The National Interest's September-October issue, Thomas Frank, in the July issue of Harper's Magazine, calling gold “yet another eccentricity of the right-wing fringe … into the mainstream of American life,” Paul Krugman's July 6 New York Times blog post, “The Armageddon Caucus“: “Gold bugs have taken over the GOP,” Think Progress' June 9 report by Marie Diamond stating that “Tea Party groups are determined to make returning to the gold standard a litmus test for GOP presidential candidates. And it looks like they're succeeding,” and the Roosevelt Institute's Mike Konczal blogging on April 27, “Conservatives are organizing against a full employment mandate and rallying around the gold standard wing of their party.”

Professor Roubini launched an amusing 16 hour War via Twitter, tweeting against Tangent Capital Management's James Rickards and his Currency Wars: The Making of the Next Global Crisis. But in prosecuting that war Prof. Roubini steps on a landmine. He attempts to refute Rickards by reference, in part, to the writings of one Ben Bernanke.

Whatever one thinks of Bernanke, this is the intellectual equivalent of an unforced error. As this writer previously has noted here then-Professor Ben Bernanke observed, in an NBER Working Paper written with Harold James, that the sustained deflation that was the precipitating factor of the Great Depression was not the fault of the gold standard, but was “the result of a mismanaged international gold standard.”

Years later, in remarks at Washington and Lee University in 2004, then-Governor Bernanke noted that

The gold standard appeared to be highly successful from about 1870 to the beginning of World War I in 1914. During the so-called 'classical gold standard period, international trade and capital flows expanded markedly, and central banks experienced relatively few problems ensuring that their currencies retained their legal value.

Thus, to rely on Bernanke in making his overheated abjuration of the gold standard Prof. Roubini has misstepped, badly. Roubini's critique seems to be based on a failure to grasp the distinction between the classical gold standard and the gold-exchange standard.

Under a gold-exchange (exchange therein employed as a noun, not verb) standard a key currency – the pound sterling, then, after Bretton Woods, the dollar – is deemed “as good as gold” and is given the status of a legitimate central bank reserve asset interchangeably with gold.

The Daily Ticker, quoting Roubini: “One of the major causes of the Great Depression was the existence of the gold standard and the return to the gold standard after World War I … and lead eventually to the Great Depression.” Prof. Roubini enjoys international prestige from his claim to have foreseen the collapse of the housing market and the attendant 2008 recession. His failure to distinguish between two superficially similar but substantively different monetary regimes threatens his credibility and, if noted, maybe his tickets to Davos.

Beyond Bernanke, Roubini's reliance on Lord Keynes as an authority in ridiculing the gold standard is slightly off kilter. As the greatest living student of Keynes, Lord Robert Skidelsky, wrote in The Financial Times, “Keynes's famous dismissal of the gold standard as a 'barbarous relic' does not quite capture his opinion of the metal, which he thought would be useful as a constitutional monarch but disastrous as a despot.” Lewis E. Lehrman (with whose eponymous institute this writer is professionally associated) quotes Keynes as the epigram for his new book, The True Gold Standard: A Monetary Reform Plan without Official Reserve Currencies: “If the gold standard could be reintroduced…, we all believe that the reform would promote trade and production like nothing else, but also stimulate international credit and transfers of capital to the places where they are most useful.”

Bernanke, unlike Roubini, precisely makes the distinction between the gold standard and the gold-exchange standard. Roubini's sloppy characterization of the gold standard as causing the Great Depression viewed as inaccurate by scholars of Bernanke's stature — is commonplace but wrong.

This erroneous view is derivative to the widespread misunderstanding that there is “not enough gold,” leading to deflation and depression. That myth recently again was dismissed by Forbes.com's own Nathan Lewis in Applying the Numbers To Gold Supply and Demand:

If you look at any historical gold standard system, such as the Bank of England in the 1880s, you find that the “money supply” (base money) is in fact quite variable….

There's nothing stable at all about the “money supply” with a gold standard system. It adjusts, automatically via the value parity, to the economic conditions of the time.

The “stable” part is stable value. The British pound maintained a defined value compared to gold. Gold, likewise, maintained a stable value in part because the supply was very large and stable.

Lewis's debunkings now are supplemented by Christopher Potter, president of Northern Border Capital Management. Potter, in a recent column exclusive to the Lehrman Institute's gold standard website, TheGoldStandardNow.org (to which he serves as advisor), published “Price Stability and the Gold-Linked Dollar“:

Price stability, not deflation, was the hallmark of a dollar convertible to gold both in the 1800s and the pre-1971 20th century … The US price level (CPI) was the same in 1914 as it was in 1834. The absence of inflation for almost a century did not come at the expense of economic growth. On the contrary! US real Gross Domestic Product (GDP) grew approximately 4% per year for that entire interval, the greatest period of growth in US history. Even during the period 1914 to 1971, as the gold standard was progressively diluted by the gold exchange standard, the residual link between the dollar and gold restrained the CPI, and promoted robust economic growth. After Nixon suspended convertibility of the dollar to gold in 1971, the CPI began its steep, modern-day ascent and the US economy, while continuing to grow, never regained the growth level and price stability seen from 1834 to 1971.

The American, and world, economy continues to teeter. Monetary reform is receiving some freshly respectful looks both here and abroad. Chatham House, the Royal Institute of International Affairs, in London has convened a task force to “re-assess the advantages and weaknesses of the current fiat currency monetary system and explore the possibility of a new role for gold.” TheStreet's Alix Steel observed last month, in “4 Ways a Gold Standard Can Work,” that “A gold standard isn't for the gold bugs and crackpots. It's a viable money system that could save countries with runaway spending.”

Prof. Roubini, the gold standard no longer can be viewed by the capable as a refuge for lunatics and hacks. Thoughtful policy analysts will do well to consider monetary reform options, very much including the gold standard, on the merits, rather than reflexively, and sooner rather than later.