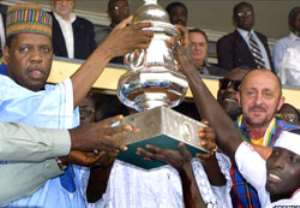 Following the scathing remarks and challenge thrown by a former player of Accra Hearts of Oak, Emmanuel Osei Kuffour, that 2000 CAF Champion League winners, Accra Hearts of Oak reneged on a promise to give each player a reward of $20, 000 after the historic feat.

The Administrative Manager of the club, Ashford Tettey-Oku has stuck his neck out, saying the player and all others of his (Osei Kuffuor) ilk, who continue to lend credence to this assertion, got it all wrong.

In debunking the claims by Emmanuel Osei Kuffour, who played a yeoman's role in the CAF Champions League winning feat, Ashford explained that the prize money for winning the trophy was $500, 000 -and for a team that registered 30 players for the competition, it was not possible for the club to make such a promise.

'No management will come out to make such a promise when they know that the prize money for winning the trophy was $500, 000. That is not mathematically feasible', he remarked.

He added that in addition to the $100, 000 the playing body was allowed to take the money for each goal scored.

Ashford, who was speaking on Joy Sports in response to a challenge Osei Kuffour had thrown to management to come out to deny his accusation of failing to redeem their promise, noted that at the time, the players were paid GH¢60 as winning bonus in the year 2000.

He said since the club was anticipating a $2.7million cash payment from the World Clubs Championship, which was eventually called off by FIFA that year, a promise of $600, 000 was made to the promise, but in view of the cancellation of the tournament that year, the club could not pay the money.

'We promised the playing body and technical team six hundred thousand dollars, but since the competition could not come off, and in effect, we didn't get the money, we could not pay what we didn't have.

'However, for winning the CAF Champions League and the Super Cup, $100, 000 was released to the coach to share among the playing body and the technical staff. At no point did management promise to give each player, $20,000', he stressed.

Ashford Tettey-Oku further explained that contrary to expectations, the club did not have the ($500,000) prize money due it, but CAF rather gave Hearts $370,000.

'CAF explained that there were deductions which affected the total prize money, so we didn't get $500,000 but we still paid the playing body and technical team $100,000″.

Players of the 200 squad that won the cup - especially Edmund Copson, recently came out to lambaste the club for failing to honour their word, and Emmanuel Osei Kuffour's revelation is the second verbal attack against the club for allegedly failing to honour its promise. James Nanor, a member of the squad, also confirmed the story.

According to the players, monies were paid to them in bits, and as far as they are concerned, the $20,000 promise remains outstanding, and they are planning to meet the current top brass of the club to hold discussions on it.