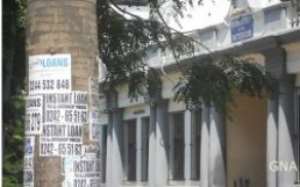 Small scale micro-finance and loan companies have defaced structures at the Ministries, the official Government business area, in Accra, with posters and banners in an attempt to woo government workers to patronise their services.

An exploratory tour of the Ministries and its environs on Saturday by Ghana News Agency observed that most structures including car parks and tress in front of Ministries of Health, Trade and Industry, and Communications, have all been disfigured with “A4' size posters,” some of which are worn-out.

The tall, beautiful and majestic Date Palm Trees in front of the Ministry of the Interior had also been 'clothed' with the posters creating distracting scenery at the core-centre of government business.

The GNA observed that almost every structure in the Ministries is decorated with loan companies posters or banner.

They are all seeking to attract government salaried workers to grant them unsolicited loans offers.

Some officials, who spoke with the GNA at the Ministries, said not only had these companies defaced the area, but also their agents and sales representatives constantly harassed workers during official working hours with enticing words just to get them to take a loan.

Mr Dominic Owusu Mensah, a Chief Accountant at one of the Ministries noted that even though the companies claimed that they provide affordable credit, workers who took the loans were worse off at the end of the day.

He said the Ministries area used to be a restricted area in the past, a situation which created a peaceful uninterrupted business environment, but now all kinds of people without official government business enter directly into offices to market their products.

“It’s a nuisance to enter an office to see merchandise including underwear’s, deodorants, perfume, second hand clothing, especially suits and at times food stuffs being displayed in some offices,” he said.