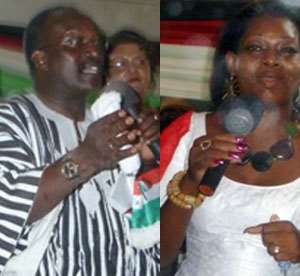 DRAMA UNFOLDED at Agona Swedru in the Agona East District of the Central Region over the weekend when the Minister of Agriculture, Kwesi Ahwoi, who contested the National Democratic Congress (NDC) Parliamentary primaries in the constituency, lost the elections.

Mr. Ahwoi polled 143 as against 146 votes by his main contender, Queenstar Pokuah Sawyer, an estate developer.

Other contestants, Eric Turkson and George Kojo Yankah, polled 82 and 1 vote respectively, as two of the ballot papers were spoilt.

Mr Ahwoi, who was wearing a black and white 'Fugu' with a pair of black shoes and trousers, started sweating profusely on his seat immediately the counting of ballot papers had been completed and he realized he had lost the elections.

The minister, who looked very disappointed, stood up and exchanged greetings with some delegates who were closer to him even though the Electoral Commission officer had not officially announced Madam Sawyer as the winner.

Minister of Trade Hannah Tetteh, Minister of Roads and Transport Mike Hammah, Ato Ahwoi, his big brother and some District Chief Executives (DCEs) as well as some national executives of the party who were there to give him moral support, looked very disillusioned.

The Central Regional Minister, Comfort Ama Benyiwa Doe, who had confidently stormed the ground, left the scene before his close ally was declared a loser.

Mr. Ahwoi, in his address, pledged his commitment to assist Madam Sawyer to win the seat for the party in the next general elections.

Hannah Tetteh stated that there was no loser or winner, hence the need for all contestants to unite for the betterment of the party.

According to some delegates who spoke to DAILY GUIDE on anonymity, they voted against Mr. Ahwoi to teach the Ahwois A lesson.

A delegate alleged that Mr. Ahwoi gave each delegate an amount of GH¢400. Sawyer was also alleged to have given the delegates money as well as some items meant for National Disaster Management Organisation (NADMO) which were to be distributed to flood victims in the area.

Mr. Ahwoi, according to DAILY GUIDE source, held a victory party at his home town at Mankrong junction on Friday, during which delegates were given drinks and food whilst dancing to the tunes of highlife music.

They further claimed Ahwoi only started coming to the area a few months ago when he expressed interest in contesting the primaries, hence the need to teach him a bitter lesson.

They said they could not vote for Mr. Ahwoi to stay in Accra and come to the area when he only needed help since they all had tapes on which Mr. Ahwoi claimed he hails from the Western Region and not Central Region.

In the Central Region, the elections were held in eight constituencies where four Districts and Municipal Chief Executives who contested the elections won massively.

The four were the DCE of Asikuma-Odoben-Brakwa, Georgina Nkrumah Aboah, who polled 365, as against the 25 garnered by Emmanuel Tawiah Aboagye.

At Wawase, information gathered by DAILY GUIDE revealed that the chief of area, Nana Kow Ababio, nearly prevented the NDC from holding the elections there.

According to a source close to DAILY GUIDE , the chief had earlier warned the party executives not to host the programme in the community due to the recent fracas between the people of Jukwa and Hemang over the siting of a district capital.

The NDC executives compensated the angry chief with a position to chair the function.

Mr. Oppong, who contested the seat as an independent candidate in the 2008 general elections, in his address after the election, threatened to advise himself.

'I have accepted the defeat but there is a clause, and the clause is never try to intimidate my followers or else I will advise myself since everybody's votes count if we only want to win the 2012 elections,' he stated.

The regional communications director of the party, Bernard Allotey Jacobs, described the elections as very unique.