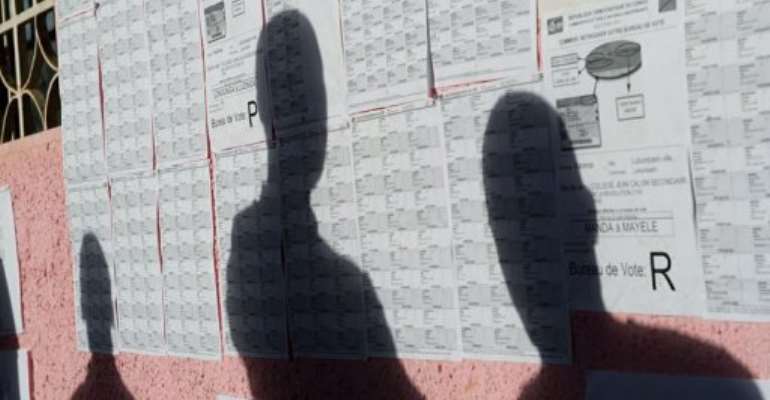 A Congolese man checks his name against the list of registered voters. By Phil Moore (AFP)

KINSHASA (AFP) - Officials guaranteed Sunday the DR Congo's elections would go ahead on time despite rising tensions as opposition leader Etienne Tshisekedi called, then cancelled, a rally in defiance of a ban imposed after deadly unrest.

The head of the Independent National Electoral Commission (CENI) said 99 percent of polling stations were ready for Monday's presidential and parliamentary vote, after repeated delays and logistical headaches in a country two-thirds the size of western Europe had raised fears of a postponement.

"Our teams assure us that things are going well and that the polling stations will open tomorrow on time," said CENI chief Daniel Ngoy Mulunda.

"There will be no postponement."

Meanwhile Tshisekedi, who tried to hold a final rally in the capital Saturday but was stopped by a police barricade at the airport, raised fears of fresh violence with new plans for a rally -- but then called them off as night fell.

Kinshasa police had banned all rallies Saturday after clashes that killed at least two people on what was supposed to be the last day of campaigning, and Tshisekedi's plans had raised tensions on the last day before the vote.

UN Secretary General Ban Ki-moon and the European Union's election observation mission both condemned the chaos that marred the end of the campaign.

"I call on all political leaders and the people of the Democratic Republic of the Congo to exercise restraint throughout the process to ensure that the elections are held in a peaceful and secure environment," Ban said Sunday in a statement from New York.

He told the government it had "primary responsibility" for maintaining peace.

The EU team accused the police of committing "grave restrictions on the right to campaign and the principle of equality", and said mismanagement by Kinshasa authorities had curtailed the freedom of expression and assembly.

"A lot of the time pre-election violence is a precursor to a situation of intimidation, where you are basically saying that you don't want people to actually enjoy the freedom to cast their ballots," said Malefetsane Nkhahle, mission leader for the 15-nation Southern African Development Community's election observer team.

Large crowds had gathered Saturday near Kinshasa's biggest stadium and at the main airport to welcome the top two presidential rivals, Tshisekedi and the incumbent Joseph Kabila, who both planned to hold their final rallies in the capital.

The festive atmosphere soon unravelled into unrest as police clashed with Tshisekedi supporters near the airport, using teargas, water cannon, batons and live ammunition to disperse the crowd.

One person was killed in the melee, hit in the head with a rock, according to police.

At least three people were shot in the legs, apparently by police, AFP correspondents said.

But Tshisekedi, a 78-year-old veteran politician known for his unbending personality, vowed to ignore the ban, sparking a more than seven-hour stand-off with police who blocked his convoy at the airport.

A defiant Tshisekedi emerged through the sunroof of his red Hummer to stare down the national police chief and some 300 officers who forced members of the 20-car entourage into their cars with shoves and baton blows and escorted the motorcade into the city shortly before midnight.

The interior ministry later said two people had died in the unrest, without giving details. The opposition disputed the figure, saying around 10 people had died.

The violence closed a tense campaign marred by a series of street fights between rival supporters.