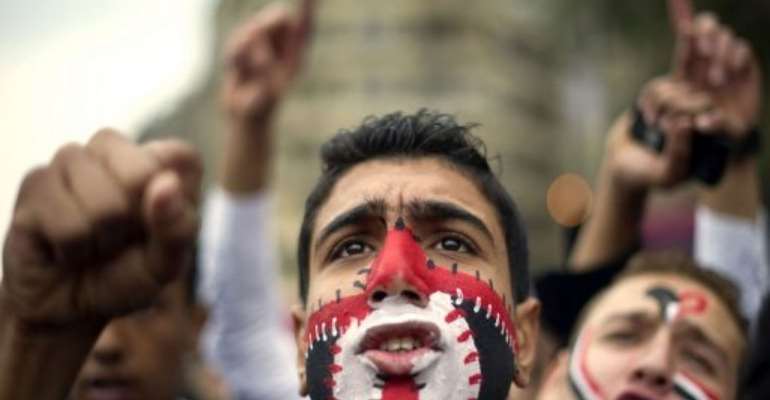 An Egyptian anti-military protester shouts slogans during a demonstration. By Odd Andersen (AFP)

CAIRO (AFP) - Egypt's army ruler on Sunday urged voters to come out in force in the country's first post-revolution election that has been clouded by violence, demonstrations and a standoff with civilian leaders.

Egyptians go to the polls on Monday to cast their first votes for a new parliament after the end of the 30-year rule of strongman Hosni Mubarak, forced from power in February in one of the seminal moments of the Arab Spring.

The run-up to voting in the cultural heart of the Arab world and region's most populous country has been marred by fears of chaos as the army, pro-democracy protesters and new political leaders fight for influence.

Field Marshal Hussein Tantawi, who heads a council of generals who took power after Mubarak's fall, called for a large turn-out and said he would not buckle in the face of demands for the army to stand down.

"I ask the Egyptian people to vote and to express themselves in order to have a balanced parliament that represents all sides," he said in statement that also called for support for a new caretaker premier appointed last week.

He warned, however, that "we are faced with enormous challenges and we will not allow any individual or party to pressure the armed forces," adding that Egypt stood at "a crossroads."

"Either succeed politically, economically and socially or face very dangerous consequences... and we will not let that happen," he said, according to the official MENA news agency.

Protesters have again occupied Cairo's Tahrir Square, epicentre of the mass protests that drove Mubarak from power, but this time their target is Tantawi and his fellow generals.

Thousands gathered for a "million-man" rally called on Sunday to demand the end of military rule, though attendance was low by previous standards, partly because of rain that began in mid-afternoon.

"Down with the military!" shouted one group of young men on the edge of the square underneath a lamp post from which an effigy dressed in army green was hanging by the neck.

Feeding the anger of those assembled in Tahrir, many of whom carried visible injuries from last week's unrest, was the death of an unarmed 19-year-old demonstrator on Saturday who was crushed by a police truck.

The demonstrators fear that Egypt's temporary military rulers are looking to consolidate their influence and are too quick to resort to Mubarak-era tactics of violence and repression when faced with opposition.

The decision by the Supreme Council of the Armed Forces (SCAF) to appoint Kamal al-Ganzuri, a 78-year-old former Mubarak-era politician, as caretaker prime minister last week has fanned the flames of popular anger.

The generals have also pushed back the original timetable for transferring power to a civilian government and demanded a final say on all legislation concerning the army in the future.

Outside Tahrir, the political leaders expected to shape the democratic future of the country of more than 80 million people are locked in a fight for influence.

In an effort to resolve the crisis, Tantawi called a meeting with all political party leaders and future presidential candidates, but it was boycotted by several leading figures.

It was agreed to form an advisory council to work alongside the government and the military council, according to presidential hopeful Selim al-Awwa, but it was not immediately clear who would sit on the body.

The violence over the past week, which has seen 42 people die as police used live ammunition and tear gas, has cast a pall over the start of voting that was intended to usher in a new democratic era.

The unrest has led to calls for the elections -- spread in three stages over six weeks in a complicated process -- to be delayed because of deteriorating security and the threat of boycotts.

"The blood of the revolutionaries has not even dried yet on Tahrir Square and we should take part in elections? I won't go to vote," said one protester on Sunday who gave his name as Mustafa.

The influential Islamist group the Muslim Brotherhood is expected to emerge as the biggest party in the new parliament, but without an outright majority.

It said on Sunday that if it emerged as the biggest party it should be asked to form a new government.

There is great uncertainty over how the new parliament, to be elected in stages over the next six weeks, will function because of a lack of clarity from the SCAF and the legal limbo until a new constitution is written.

Two days of voting from Monday will take place in the main cities of Cairo and Alexandria as well as Fayum, Luxor, Port Said, Damietta, Kafr el-Sheikh and the Red Sea province.

Other cities and regions follow on December 14 and January 3.