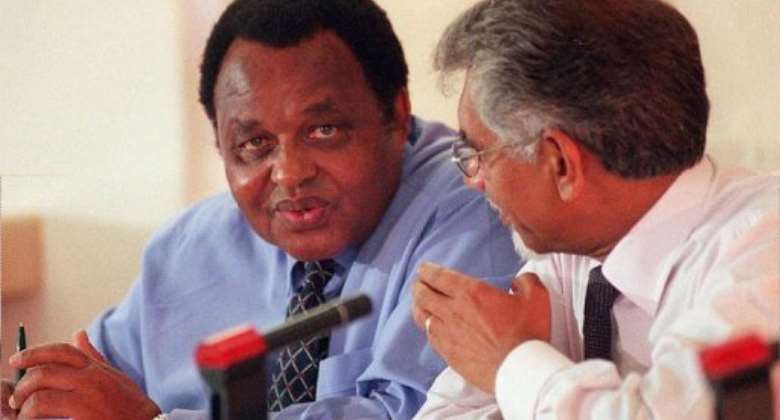 Maharaj had made statements in 2003 that were at odds with a money trail to foreign bank accounts. By Anna Zieminski (AFP/File)

JOHANNESBURG (AFP) - A South African newspaper on Sunday printed the sealed transcript of an old police interview with President Jacob Zuma's spokesman, who at the time was the subject of a corruption probe.

The City Press's decision to republish extracts of the 2003 interview with Mac Maharaj comes amid growing concerns over press freedoms in South Africa.

The newspaper had first illegally printed the interview four years ago.

But when a rival newspaper, the Mail&Guardian, recently got a hold of the same transcripts, it was immediately threatened with legal action by an elite investigative unit and police opened a probe into how IT got the transcripts.

Ultimately, that paper printed only redacted parts of the Maharaj interview, which was conducted by police investigating his ties to an arms deal.

Maharaj, Nelson Mandela's former transport minister, had made statements to investigators in 2003 that were at odds with a money trail to foreign bank accounts, City Press said.

Maharaj has denied any wrongdoing.

An inquiry into the long-running arms deal saga was recently reopened by Zuma himself.

"The details were exposed to millions years ago, rendering the idea of confidentiality moot. Yet the state has now put its top cops on to this enquiry," the City Press wrote in a font-page editorial.

"The publication of the inquiry is in the public interest because it provides some of the answers as to how arms dealers and multinationals began corrupting our institutions, systems and leaders," said City Press.

The enquiry into how the Mail&Guardian got the transcript comes as many fret over press freedoms.

On Tuesday, the ruling African National Congress passed a state secrets bill, criticised as a threat to free speech, through the National Assembly.

Editors and activists have vowed to fight the bill, which has not yet become law.

The Law Society of South Africa on Sunday said it plans to approach Zuma "to raise its concerns with him on the serious inroads that the bill -- as it stands -- makes into our hard-won constitutional democracy".

Many have blasted the bill, including Nobel Peace Prize winner Desmond Tutu and the office of Nelson Mandela.

"On Tuesday, the parliamentary chamber where Nelson Mandela presided over the dismantling of apartheid and the passing of the constitution was transformed," the Sunday Times wrote in its latest editorial.

The ANC insists the Protection of State Information Bill will not target journalists and is needed to update apartheid rules, while still respecting current protections for whistleblowers.

Transcripts of Maharaj's questioning during a probe into the arms deal are sealed under a different law protecting witnesses against self-incrimination in exchange for truthfulness.

Court issues warrant for arrest of Xavier Sosu for 'disrespe...
33 minutes ago