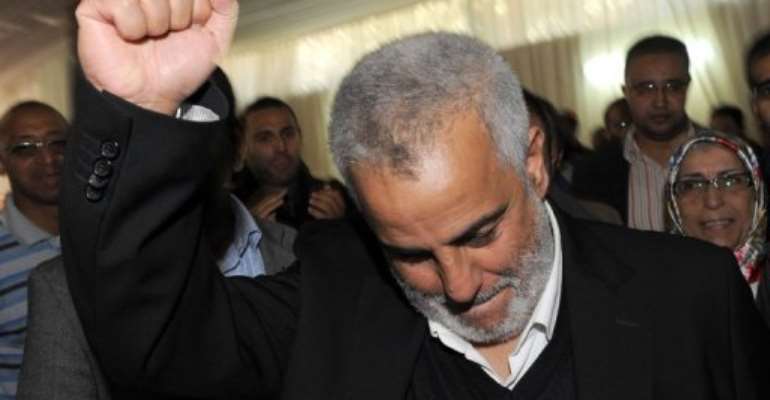 Benkirane said his party would need to tailor its programme to appease prospective coalition partners. By Abdelhak Senna (AFP)

RABAT (AFP) - Morocco on Sunday awaited final results from elections in which moderate Islamists emerged as the dominant political force, the latest religious party to achieve huge gains on the back of the Arab Spring.

With 288 out of the 395 seats up for grabs in the lower house of parliament awarded, the Justice and Development Party (PJD) captured 80 seats in the election, Interior Minister Taib Cherkaoui said Saturday.

That is nearly double the 45 seats won in Friday's polls by Prime Minister Abbas el Fassi's Independence Party, which finished second and has headed a five-party coalition government since 2007.

The interior ministry is scheduled to release final election results on Sunday at 5 pm (1700 GMT).

If the preliminary results are confirmed, the PJD's victory will come just one month after Islamists won Tunisia's post-revolution election and days before their predicted surge in Egyptian polls.

Under a new constitution overwhelmingly approved in a July referendum, King Mohammed VI will have to name a prime minister from the PJD.

The king, the latest scion of a monarchy that has ruled the country for 350 years, proposed changes to the constitution that curb some of his near absolute powers as autocratic regimes toppled in nearby Tunisia, Egypt, and Libya and pro-democracy protests brewed at home.

The Islamists will have to govern with other parties and PJD leader Abdellah Benkirane acknowledged that his party would have to tailor its programme to appease its coalition partners.

"As far as alliances are concerned, we are open to everyone, I have always said that," he told the France 24 television channel on Saturday.

"We will be required to revise our programme to come up with a common programme. But the nub of our programme and of those who will govern with us will have a double axis, democracy and good governance."

Two parties that make up the outgoing governing coalition -- the Independence Party and Socialist Union of Popular Forces - have said they would be willing to govern with the Islamist party.

The Party of Authenticity and Modernity, which was founded in 2008 by several politicians close to the king, has also indicated it was open to governing with the Islamists.

Unlike the banned Islamist opposition group Justice and Charity, the PJD pledges its allegiance to the monarchy.

The party has gradually increased its share of the vote in Morocco, seen as one of the most liberal and stable countries in the region.

After winning just eight seats in 1997, the PJD surged in popularity, scooping 42 seats in the 2002 election, the first of King Mohammed VI's reign.

It then increased its share in the last election in 2007 when it finished second with 47 seats.

The party focused at first on social issues, such as opposition to summer music festivals and the sale of alcohol, but has shifted to issues with broader voter appeal like the fight against corruption and high unemployment.

During the current campaign it promised to cut poverty in half and raise the minimum wage by 50 percent.

Voter turnout was 45.4 percent, up from 37 percent from the last parliamentary election in 2007, but lower than the 51.6 percent turnout recorded in 2002.

Morocco's pro-reform February 20 protest movement, responsible for protests held just before the king announced plans to change the constitution, had called on voters to boycott the election. It argues the reforms are insufficient.