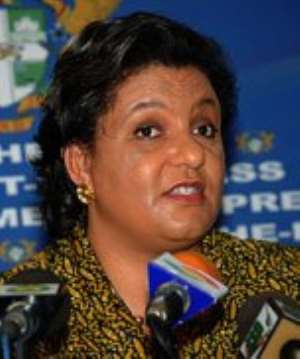 The Ministry of Trade and Industry (MoTI) has challenged the country’s industrial community to manufacture quality products that can withstand the threat posed by foreign products rather than waiting on the government to encourage protectionism in the local market.

The sector Minister, Ms Hannah Tetteh, who threw the challenge during the 22nd anniversary celebration of the Africa Industrialisation Day in Accra said the solution to the influx of foreign goods into the country “is not only through increased tariffs of protectionism from the government.

“The solution is a well-developed and strong industry capable of manufacturing quality products that can match up to the foreign ones if not undo them,” the minister said.

The launch, which coincided with the AGI’s industrialisation week, attracted representatives from the UNIDO, UNDP, the Energy Ministry, as well as the MoTI.

While admitting that foreign goods posed a threat to local industries and the economy at large, Madam Tetteh said the government would continue to play its part in checking the trend but called on local industries to step up the quality of their products as a way of undoing the foreign ones, most of which were often shoddy.

She also encouraged the AGI “to take industrialisation to the rural areas instead of limiting them in the cities and towns.”

Madam Tetteh mentioned the launch of the ministry’s industrial policy document earlier this year as some of the initiatives aimed at stimulating industrialisation in the country.

The Industrial Policy, she said, was aimed at increasing the accelerating growth in the country’s industry through a targeted growth rate of 12 per cent.

The President of the association, Nana Owusu Afari, who chaired the function later told the Daily Graphic that the association “is not asking the government to support local industries produce shoddy goods.

“Quality is not the problem,” he stated and added that the “AGI itself is even passionate about quality products but we also need government policies that will help local industries to produce to meet the local capacity”.

The president tasked the government and industry stakeholders “to be proactive in dealing with our age old challenges,” noting that the recently launched Industrial Policy Document by the Ministry of Trade and Industry could prove a “strategic document for revitalising industry in Ghana.”

Accra: One Killed As 4 Cars, 2 Motorbikes Collide At Anyaa
6 minutes ago

Delaying To Release Seed Funds For Purchase Of Cocoa Unprece...
59 minutes ago