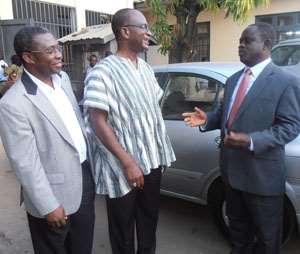 As part of measures to save land information from loss and degradation, the Lands Commission has established scanning centres to convert all documents at the land registration office into digital form.

The first of the scanning centres has been situated at the Lands Commission offices at Cantoment in Accra.

The scanning centres form part of efforts by government and the department to improve the current chaotic situation at the lands department, which has been causing delays in accessing documents.

There are reports that the management and staff of the Lands Commission department have become fed up with the situation but on Thursday, they held a meeting  with the Minister of Lands and Natural Resources Minister, Mike Hammah, to find lasting solutions to the problems.

After hours of the closed-door meeting, reporters were finally briefed on the outcome of the meeting.

As part of the move, about 290,000 documents are said to have been scanned already.

Mr. Mike Hammah, in an interview with the media after the closed-door meeting, lamented that the condition at the Lands Registry really needed immediate intervention, explaining that the department 'in the first place, has to be re-organised to make accessibility of records easy'.

He said after thorough interaction with the staff, his outfit had decided to clean up the system in the initial stages, adding that 'the ministry has to put up proper structures that will end the chaotic situation.

'We have taken a lot of suggestions from the staff and we are now going to address the issue with all seriousness.

'At the moment we are working hard to ensure that we deliver a one-stop shop and efficient and transparent, reliable centralized land administration in the country that will ensure security of tender.

'We have to use within two to five years to ensure that profiles of particulars or individual persons are properly taken care of and scanned.'

Mr. Hammah noted that his outfit was as well working hard to correct the wrongs at the Lands Commission by involving the staff in solving the problems. 'The human being has to be re-equipped to be able to carry out their assigned task'.

Touching on lack of proper planning in developmental projects by Ghanaians, he stated, 'Over the years, we have had a lot of development capital because the properties do not have titles and as we have commenced the cleaning of the system, we will ensure that people get proper titles'.

'This, we are sure, will help Ghanaians get access to loans from the banks to carry out developmental projects'.

He lamented that it was unfortunate that it sometimes took people five to 10 years to develop a project. 'If we have a system where the banks can intervene for a short period, it will help the economy as the money that is being used to build in a very long time could be used for other developmental projects'.