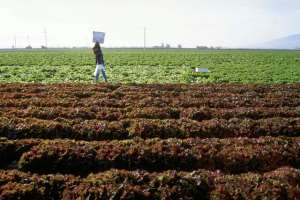 Tamale (N/R), Nov 25, GNA – Traditional rulers, religious bodies and civil society organizations (CSO), in the Northern Region, on Thursday called for the sustenance of the Fertilizer Subsidy Programme (FSP), being implemented by the Government.

They hailed the FSP for leading to a significant increase in food crop production and food security in the country.

Speaking at a day's workshop to discuss the way forward for the FSP, in Tamale, Yun-yoorana (Chief) of Mamprugu-Bunkpurugu/Yunyoo, Yamyia Tooka II, said the FSP has helped in improving agriculture and withdrawing it would mean impoverishing poor small-scale farmers.

The event, organised by the Peasant Farmers Association of Ghana (PFAG), followed two similar ones organized by the association for farmers and fertilizer suppliers, in Accra this year, to solicit their inputs for a review of the FSP by the Government in 2015.

This became necessary after statistics showed that Ghana's fertilizer application rate was one of the lowest in the world, standing at 8kg/ha, compared with 20kg/ha in sub-Sahara Africa, 99kg/ha in Latin America, 109kg/ha in South Asia, and 149kg/ha in East Asia and South-East Asia.

This low application rate was attributed to among others, the high cost of fertilizer as for example a bag of 50kg NPK fertilizer at 40 dollars.

However, just three years into the institution of the FSP, it is beset with challenges, which threatens its effectiveness, and sustainability.

These include confusion, and or corruption in the distribution of subsidized fertilizer, the product sometimes getting to farmers after the main farming season is over, and financial squeeze from the sponsors of the programme, making the Government to announce an exit strategy, which may take effect in 2015.

Yamyia Tooka II called on the Government to take measures to prevent the smuggling of subsidized fertilizer.

Mr Titus Segtub, Project Officer of SEND – Ghana, a CSO, advocated the allocation of a quantity of subsidized fertilizer, specifically for small-scale farmers, to prevent financially viable large-scale farmers from buying all the product to the disadvantage of the poor farmers .

Mr George Bamombe, Programme Officer of Association of Church-based Development non-governmental organizations, appealed to the authorities to increase the stock of subsidized fertilizer.

Ms Victoria Adongo, Programme Coordinator of PFAG, said the FSP has helped to reduce poverty, especially among vulnerable rural women and called for the sustenance of the FSP.