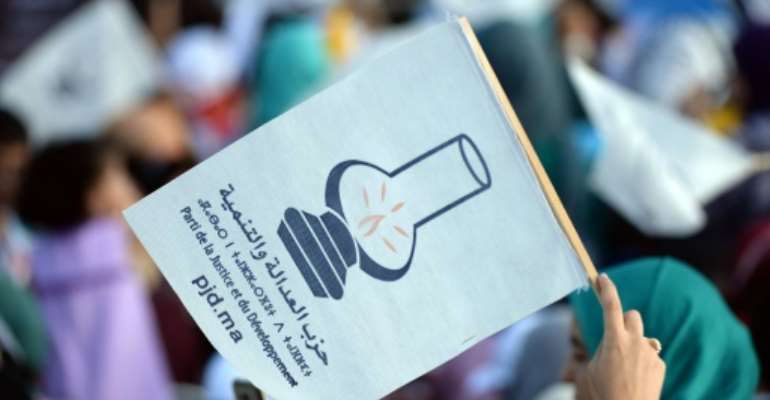 The flag of the Islamist Justice and Development Party (PJD) is waved during a party meeting ahead of local elections on September 2, 2015 in Tangier. By Fadel Senna (AFP)

Rabat (AFP) - Some 15 million Moroccans go to the polls Friday for local elections seen as a gauge of the popularity of the government of Abdelilah Benkirane a year ahead of a general election.

Around 32,000 seats on local and regional bodies are in play in a vote that will offer a snapshot of the political climate, four years after the Arab Spring swept through the north African state.

The 2011 protests led to concessions from King Mohammed VI, and a new constitution was issued, leading to a parliamentary vote in November of that year that brought Benkirane's Islamist Justice and Development Party to power.

Benkirane remains popular in the conservative country, despite limited success in tackling corruption, and is credited with bringing down the budget deficit to less than five percent of GDP, down from seven.

But Mustapha Bakkoury, leader of the opposition Authenticity and Modernity Party, has criticised Benkirane's rule.

"His priority over the last four years has been his own clan, rather than all the people of the country," said Bakkoury, a close adviser to the king.

With less than half of registered voters taking part in the election of 2011, turnout at Friday's polls is being closely watched for an indication of the state of political transition in one of the region's more stable countries.

"In a Morocco that is learning to walk along the path of democracy, participation in elections is not a luxury; rather it is the first step along the road to building the future," said independent daily Akhbar al-Yaoum on Thursday.