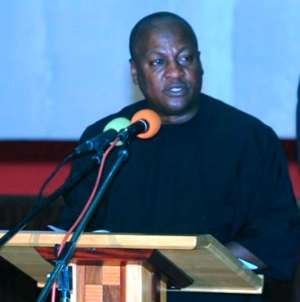 Accra, Nov 24, GNA - Government would soon receive four helicopters from the Chinese Government to provide security and surveillance in the oil and gas fields in the Western Region, Vice President John Dramani Mahama, has announced.

“This will be complimentary to the recent provision of patrol boats to the Ghana Navy, which would help in all the peace keeping programmes the country's security has been undertaking.”

Vice President Mahama announced this when Lt General Lian Guanlee, Minister for National Defence of China led a 21-member delegation to call on him at the Castle, Osu.

The delegation apart from visiting the Vice President, also visited the Kwame Nkrumah Mausoleum, where they laid wreaths on the tombs of the First President of Ghana and his wife. They also held bilateral talks bordering on peace and security between the two countries.

This is the first time a sitting Chinese Minister for Defence has visited Ghana since the establishment of diplomatic relations between the two countries.

Vice President Mahama said the Chinese government had over the years been instrumental in moulding Ghana's socio-economic activities, particularly in the provision of loans and grants towards the procurement of equipment and infrastructure.

“Ghana has been engaged in many peace keeping missions and China has been very supportive in that direction which is raising our national image,” he emphasized.

Lt. General Guanlee said his visit which was at the instance of the Ghanaian Government was to enhance mutual understanding and to strengthen the relations between the two countries.

Lt. General Joseph Henry Smith, Minister for Defence, who led the Chinese delegation, announced that government had signed an agreement with the Chinese Government, where China would provide a grant of 20 million yuan to procure military equipment of their choice.

He promised to cement relations with China in the coming years to ensure mutual benefit and development between them.