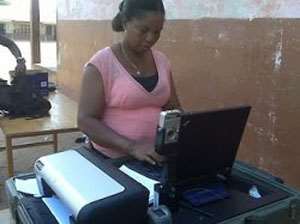 The National Identification Authority (NIA) has suspended 87 employees of the Identification System and Card Department of the Authority for locking out officials on Wednesday to demand for salary arrears.

The affected workers were prevented from entering the premises of the NIA on Thursday morning and were issued with suspension letters for 'violating the conditions of service' of the authority.

The Chief Executive Officer of the NIA, Dr. William Ahadzie, had earlier hinted Citi News that all staff who took part in Wednesday's picketing will be disciplined in accordance with the conditions of service of all staff.

Some of the workers who confirmed the news to an Accra-based radio station Joy FM felt the Authority has been unfair to them since they were not shown any code of conduct while signing their contract.

The NIA said the actions of the staff were illegal since they failed to exhaust the laid down grievance procedures of the authority.

Some aggrieved workers on Wednesday protested against authorities over unpaid salaries.

The angry protestors blocked the main gate of the NIA and prevented customers from going to take their ID cards.