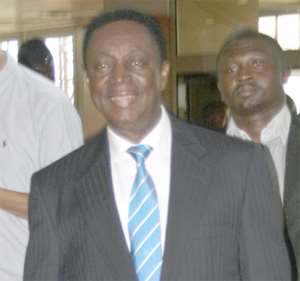 THE GHANA Mineworkers' Union (GMWU) of GTUC has commended government for taking bold steps to enhance the revenue base of Ghana as contained in the 2012 budget.

The union, in a press release issued recently and signed by Prince William Ankrah, General Secretary of GMWU, said it was particularly happy with the introduction of the windfall profit tax imposed on mining companies in the 2012 budget.

'While the GMWU welcomes the 10 percent windfall profit tax, it hopes that government will be resolute in its successful implementation.

'Also worthy of note is the upward review of the corporate tax for mining companies from 25 to 35 percent.  In the view of the GMWU, the windfall profit tax and the revised corporate tax clearly demonstrate government's bold resolve to generate enough revenue from the mining sector for our country's development goals.'

The GMWU noted that unlike South Africa, United States of America and Australia, Ghana lost out in the era of the gold rush.

'It is therefore fair and prudent for the government to effect such changes in Ghana's revenue mobilization strategy.

'It is the position of the GMWU that while pursuing these policies, government should be firm and demand that players in the mining industry must be honest and come clean when making their case about the cost implications and the impact on their operations.  This will prevent the situation where multinational mining companies tend to make huge profits at the expense of Ghana's overall development agenda,' it added.

'The acknowledgement in the 2012 budget that mining is one of the leading sectors in the country, yet its economic and social benefits have not met our expectation as a nation is indeed factual. This means drastic measures will be required to change this sad state of affairs. Again, government representatives on boards of mining companies must place the national interest first and therefore demand valid financial information and open book policy in line with ethical means of doing business in the 21st Century.'

Another critical area in the 2012 budget which the leadership of the GMWU has taken note of is the provision on Young Graduates Entrepreneurship and Innovation Initiative.

'This initiative needs the support of all Ghanaians, because the issue of unemployment is indeed scary and should be handled through pragmatic programmes like the establishment of the Centre for Entrepreneurship Employment and Innovative Initiative proposed in the 2012 budget.  It is reassuring that the proposed centre will help facilitate business startups, finance, business ideas, evaluation monitoring and business development.'

The GMWU hoped this time round, tackling infrastructural deficit in the mining communities would receive top priority, especially as the focus of the 2012 Budget was geared towards infrastructure development for accelerated growth and job creation.

'Being mindful of 2012 as an election year, the GMWU will like to entreat all political stakeholders, especially Members of Parliament, to constructively exhaust discussion on the budget in the interest of our dear country. The national good should be at the core of all political discourse with regard to the budget, so that Ghana will continue to maintain the international accolade of good democratic governance, a pre-requisite for accelerated economic growth,' it added.

It will be recalled that the GMWU's 10th Quadrennial Delegates conference held in Sunyani in August this year, among other critical issues, urged the government to impose a windfall profit tax following the rising price of gold on the international market.

'We wish to emphasize that the prompt response by government in introducing the windfall profit tax shows the willingness of political leadership to take on board suggestions from all sections of the public.  To the GMWU, this is a culture that should be nurtured to enhance democratic governance and accelerated national development,' the union added.

Election 2020: Only Uniform Personnel Will Be Deployed – Gha...
45 minutes ago