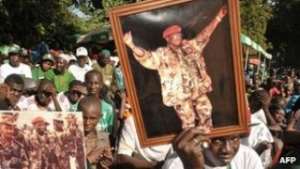 The Gambia does not have a political environment conducive for free and fair presidential elections to be held, the West African regional body has said.

Ecowas said that for this reason it was not sending election observers to monitor Thursday's poll.

Its fact-finding mission found intimidation and an unacceptable level of media control by the ruling party.

President Yahya Jammeh seized power in a coup in 1994 and has won three widely criticised elections since then.

He has been accused of intolerance to both criticism and dissent in the small West African country which is a popular tourist destination.

The chairman of Gambia's Independent Electoral Commission, Mustapha Carayol, has reacted angrily to the Ecowas decision.

'The allegations are all lies,' he told the BBC.
'Cowed by repression'
Mr Jammeh, 46, faces Ousainou Darboe, leader of the United Democratic Party, and Hamat Bah, who is being backed by a coalition of four opposition parties.

'The preparations and political environment for the said election are adjudged by the commission not to be conducive for the conduct of free, fair and transparent polls,' the 15-state West African bloc said in a statement.

It said its investigations found 'an opposition and electorate cowed by repression and intimidation'.

Ahead of the presidential poll in 2006, Ecowas urged the opposition not to boycott the elections and endanger the 'democratisation of the country'.

Mr Jammeh's government has been criticised by international rights groups for its attitude to civil liberties, especially freedom of the press.

Correspondents say there are very few posters for the opposition candidates around the country.