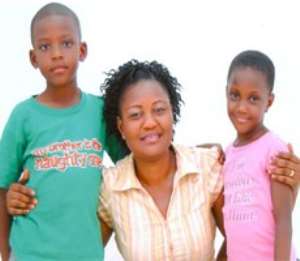 Information trickling into Daily Guide's offices indicates some interesting twists and turns in the death of Clara Atampagram, a dentist nurse at the Korle-Bu Teaching hospital.

Daily Guide has been informed of a 'suicide note' which has been supposedly discovered, two weeks after the sudden death of Clara, a mother of two, at her home at the Damax Estates at Kuntunse, near Amasaman on November 7.

The note,Daily Guide sources said, was dated November 7, 2011, and had the time 1am written on it.

Although the note, a photocopy of which was sighted by Daily Guide, did not give reasons for which she took her life, or where in the house it was located, it read: “My dear husband, you are the best thing that ever happened to me.

“I love you so much and I bless the day I met you.
“I am sorry I have to do this. Take good care of the children that I have left behind.

“Tell them how much I loved them.
“I love you so much with all my heart and my soul.
-Clara.”
Clara's husband, Dr. Raymond Kasei, a senior lecturer at the University of Development Studies (UDS), Navrongo campus, has since Monday November 7, 2011 been in police custody.

He was put before a magistrate court at Amasaman on Wednesday November 9, 2011 and remanded in custody while investigations were continued by the Amasaman District Police Command.

The UDS lecturer, who studied Watershed Hydrology at the Bonn University in Germany, is expected to make his second appearance in court on Wednesday at the Amasaman District Court.

The Homicide Unit of the Criminal Investigations Department (CID), according to a source close to the Police Headquarters, has been directed to take up the case from the Amasaman Police after the Director General, Police CID, was petitioned by the deceased's family.

The petition, sources said, indicated the family's displeasure about the manner in which the Amasaman Police was handling the investigations.

Reliable sources told Daily Guide that the suspect's relatives seemed to have regular access to the crime scene (Clara's home).

It is not clear if they had gone there under police escort.

Dr. Kasei's family had also been accusing the media of misinforming the public on the tragic circumstances between the two love-birds.

The family of Clara holds a different view as they claim Clara, during her life-time, suffered some abuse from her husband even while she was pregnant with their second child.

The UDS lecturer was arrested in the early hours of November 7 at the Nsawam Government Hospital, where he had gone to ostensibly deposit his wife's remains at the morgue.

Preliminary investigations indicated that the body was rejected by the staff on duty who insisted on admitting it only when they got a police report.

Thereafter, the police were brought in by the deceased's brother who had gone to the Amasaman Police to report of Clara's death.

Even though the police have remained tight-lipped about the incident, Daily Guide sources revealed that the police had cause to put Clara's husband into their custody because the evidence they picked at the scene contradicted his narrative of the alleged suicide.

He had told the police that he slept in the hall after Clara locked herself up in the bedroom following a heated quarrel the previous night.

He was however forced to break the bedroom door when Clara failed to show up in the morning, only to find her hanging by the ceiling fan in the bedroom.

A source however hinted that neighbours never knew of Kasei's visit or the death of his wife as he allegedly conveyed the body to the Nsawam Hospital after he was directed by a security man next door without reporting the matter to the police.

He told police that he was assisted by someone to bring down the body from the height and carried it into the car but has since failed to identify the person to the police.

Clara's remains were referred to the Korle-Bu Teaching Hospital for an autopsy on Thursday November 10, 2011 amidst sobs and tears.

An anonymous letter sent by some persons calling themselves 'Friends of Dr. Kasei' sought to threaten Daily Guide for its publications, citing the supposed suicide note and the autopsy report as clearing the suspect of any criminality.

However, legal sources claim that the tussle for bail was not yet assured, particularly when the prosecution was yet to verify the original script from the forensic laboratory to ascertain the veracity or otherwise of the alleged suicide note and also the real cause of death.

Information gathered at the University of Ghana Dental School, at the Korle-Bu Teaching Hospital where Clara worked for almost nine years before her death, indicated that she was last seen at work on Friday November 4, full of life and excitement with a bundle of cash which she said was for the payment of food she ordered for the celebrations of her daughter's 5th birthday on Thursday November 10, 2011.