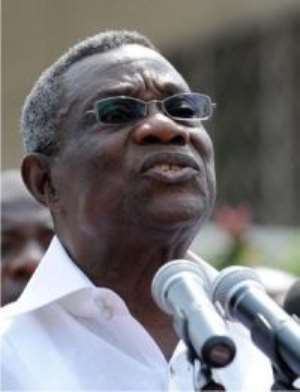 I hope Ghanaians have not soon forgotten President Mills saying in the year 2009 that the sector of the economy which he was going to use to shame his critics was the agricultural sector?

Surprisingly, the agricultural sector did not see improvement in growth over the growth rate under Kufuor. Per the figures since 2008, between the president and his critics, who should be ashamed? Shame unto critics indeed!

Also, the then candidate Mills promised the fisher folks in this country (at Mumford in the Central region) in 2008 that he was the man to be trusted on improvement in the fishing industry because he (Mills) was from the coast ( Ekumfi Otuam precisely) and because the then president (Kufuor) was from the Ashanti region where there was no sea, he (Kufour) was destroying the fishing industry.

The question one would ask is that is there any improvement in the fishing industry since Mills became the president? Well, let us see!

What are some of the factors responsible for the decline in the fishing industry under Mills? It is in part attributable to the shortage of premix that the industry has been experiencing from time to time under Mills?

A Ghana News Agency (GNA) publication on the 16th of May, 2011 quoted the MP (Kuntu Blankson) for Mfantseman East (home Constituency of the president) as calling for an investigation into why the fishermen of Narkwa (a fishing community in the president's home constituency) were denied supply of premix fuel from February 26 to May 12, 2011.Premix fuel was also in serious short supply during the peak of the fishing season last year.

The skyrocketing of prices of fishing gears such as outboard motor under Mills is also a factor. Another contributory factor is the timing of the enforcement of the Fisheries Regulations of 2010. The Fisheries Regulations came into being in August, 2010 but the Atta Mills government decided not to enforce it in any other month (be it in October, November, December, January, February, March, April, May or June) but decided to set up a task force on the 2nd of August, 2011 to seize generators and nets from fishermen at the peak of the fishing season.

This task force harassed and molested fishermen to the extent that a fisherman lost his life out of this at Komenda in the Central region. Why did the government not set up a task force to enforce the law in any other month prior to the peak of the fishing season so that the fishermen could gather resources to replace the seized nets in anticipation of the peak season but rather chose to render the fishermen jobless at the peak of the fishing season? Can this be a government that cares for the fisherman? President Mills could not even deliver on his own 'adze wo fie, a oye promise to his people (fisherfolks).

From the forgoing analysis, it is clear that president Mills' bad policies have resulted in the collapse of industries dear to the heart of his own people(people of Central region) whom he promised them adze wo fie a, oye. Per this abysmal performance of Atta Mills and his NDC since 2009, the best they deserve in 2012 is a vote of no confidence in them by voting them out come 7th December, 2012.