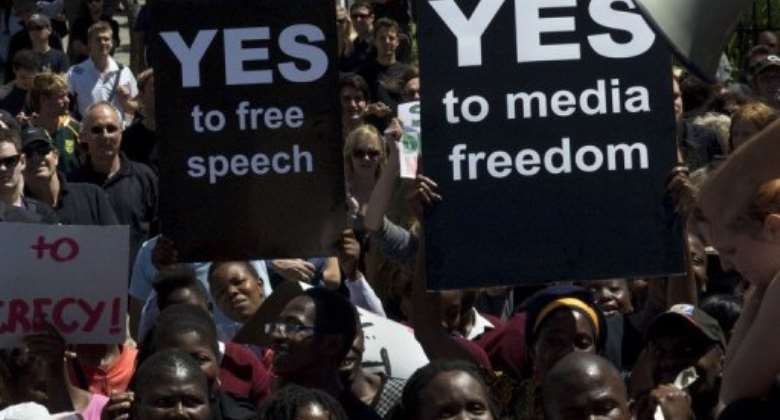 CAPE TOWN (AFP) - South Africa's parliament Tuesday approved a state secrets bill that sparked an outcry that it will threaten democracy and prevent exposure of corruption by investigative journalists.

The bill was approved in a 229-107 vote, with the ruling African National Congress (ANC) using its hefty majority in the National Assembly to muscle it through.

Editors and journalists dressed in black walked out of the chamber after opposition parties failed to derail its passing to a second house on a day of mounting concerns, not least from Desmond Tutu and Nelson Mandela's office.

The ANC insists the law will not target journalists and that it is needed to update apartheid-era secrecy rules, while still respecting current protections for whistleblowers.

"The bill aims to balance the presumption of secrecy with a presumption of openness," the office of party whip Mathole Motshekga said in a statement.

The new law will "significantly reduce the volume of information classified but at the same time to strengthen the protection of state information that truly requires protection."

Media houses fear provisions that criminalise holding or exposing top secret material with jail terms of up to 25 years. They also worry that the bill would not allow a public interest defence to argue that its airing was in society's best interest.

"We are broken inside," said Mondli Makhanya, chairman of the South African National Editors Forum.

"We never thought we'd come here dressed in black to actually witness democracy, this constitution of ours, being betrayed. We will take the battle forward."

"It will criminalise the freedom so many of our people fought for."

Mazibuko said she will take the matter to the Constitutional Court if the bill is signed into law.

"If it is passed, let the message ring out from this house across South Africa: the ANC has abandoned the values of its foundations exactly 100 years after it was founded," she added.

South Africa's press regularly uncovers allegations of graft that reach to the highest level of government. Critics fear the law could be used to conceal corruption.

"The Protection of State Information is not only flawed, it is insulting to all South Africans to be asked to stomach legislation that could be used to outlaw whistle-blowing and investigative journalism," said rights icon Tutu.

The Nelson Mandela Centre of Memory said the bill fails to strike a balance between free speech and protecting legitimate state secrets.

Human Rights Watch said the vote was "a blow to freedom of expression and democratic accountability", while Amnesty International said the bill would limit the right to expose graft.

"This fatally flawed bill, which is totally at odds with the South African constitution, takes us right back to the apartheid-era restrictions on free speech," said Noel Kututwa, Amnesty deputy director for Africa

The bill still needs approval from the National Council of Provinces, expected next year, before President Jacob Zuma can sign it into law.