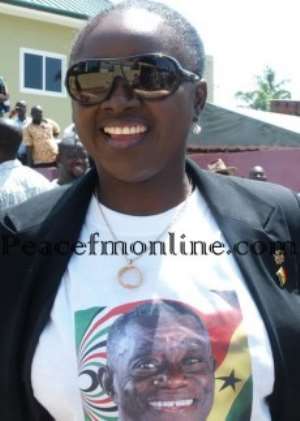 Bisiw won the NDC Parliamentary primary in Tano South over the week-end after what critics say was an opulent campaign.

She was reported to have paid for a documentary aired on television, a move Ben Ephson believed was high flying and not strategic.

“I think that my younger sister Hannah has a bit more to learn in politics because I saw a paid-for documentary last week which I believe was a bit too high flying for a constituency primary,” he said.

He added that the campaign team ought to be more strategic as they plan to face an incumbent NPP Member of Parliament.

Ephson thought the amount of money invested into the documentary could have been channeled into purchasing motorcycles for the delegates.

Hannah Bisiw was among a tall list of government appointees elected as NDC Parliamentary candidates in orphan constituencies ahead of the 2012 election.

Ephson believed Abuga Pele has a good chance of returning to Parliament having lost the seat in the 2008 elections but cautioned a split in the NDC front will be suicidal.