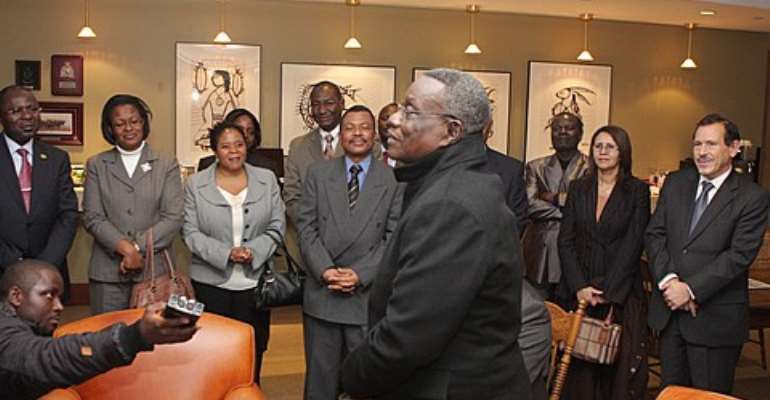 President Mills interacting with some Diplomats in Canada

Ghana's president, Prof. Atta Mills, feels indignant about the failure of some African countries to sever, what he terms, their umbilical cords from their colonial masters and, by extension, western powers.

Speaking against recent foreign interventions on the continent, the president suggested that these so-called 'masters' are cruelly usurping the sovereignty of vulnerable African states and imposing their wishes on them.

“Some countries still believe that countries in Africa should be able to dance to their tunes; unfortunately, some of us also find it very difficult to break the umbilical cords that link us to those countries.”

President Atta Mills was speaking to African diplomats at the Ghana Chancery in Ottawa, Canada as part of his trip to that country.

Without mincing words, Prof. Mills told his colleague African leaders that: “We must take bold steps forward to be able to do this.”

President Mills, who has defiantly rejected Mr Cameron's threat, maintained: “What is happening in Africa is not very pleasant, very palatable, and something that we can be proud of.”

Warning that the trend of recent foreign interventions could have serious repercussions on the continent, President Atta Mills asked his colleague leaders to stand up against foreign dictatorship.

"For far too long we listened to others, now it is not the questions of they talking to us, they are now acting the way they see best, which is not always in our best interest.”

International relations expert, Dr. Niyi Alabi commended President Mills for making such a bold statement, and hoped his peers would be enthused about his position.

“I must say [I'm] quite impressed with this kind of approach, because it is the kind of language that I have been expecting from our leaders to at least let the so-called developed world know that we cannot be doing their bidding [and] always going to them cup in hand.”