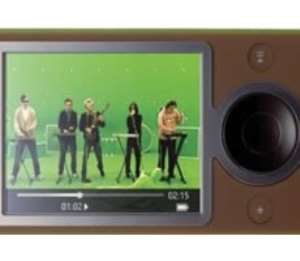 Each affair generated plenty of interest and shared numerous other similarities.

Both held their events in fashionably run-down buildings in Hollywood, famed for its rock 'n' roll history. Bands rocked under electric blue light and photographers snapped away at music stars.

At the Google function, I thought, here I was, covering another behemoth company and fierce Apple competitor christening an online music service with a swanky party. Probably smart to have some fun now. Apple has dominated music sales for most of the past 10 years. Microsoft and Google's music strategies were unmistakeably influenced by the company.

Hardware and software: Back in 2006, Microsoft's strategy to compete with iTunes was to combine a media manager, player, and online store that Zune administrators hoped would offer consumers the same kind of complete music experience the iPod and iTunes provided. Over at Google, the company can match up its fledgling music service with Android device owners. With more than 200 million activated Android phones and tablets, Google possesses a massive pool of potential music buyers. If Google Music converts just 10 percent of those device owners, that's potentially 20 million customers.

Free song samples: Microsoft enabled Zune owners to "squirt" tracks to one another as long as they were connected to Wi-Fi and were within 30 feet of each other. PC fans were overjoyed since Apple had nothing like it. After receiving a song, a Zune owner could listen three times but was required to complete the sampling within three days. After that, the music was automatically deleted.

Google Music users can share songs they buy with anyone they're connected to on Google+, the company's social network. Buy a song or album and send a link to friends who can then listen to them in their entirety. They can hear the tracks one time, free of charge.

Smaller song catalogs: Both companies started out offering fewer songs than iTunes. Microsoft launched with 2 million tracks in its library at a time when iTunes offered more than 3 million. Google launched with music from three of the four largest record companies, as well as numerous independent labels, but has not reached an agreement with Warner Music Group. Apple has obtained licenses from all four majors.

It's likely that Google Music managers don't want their Android devices or music service compared to Zune or the Marketplace. That didn't end well for Microsoft.

The trouble started with the music player. Remember the brown brick? The initial Zune players were clunkier than the iPod. The device came in black, white and brown, which some critics dismissed as downright ugly. Some features won praise, like a 3-inch screen which was considered large at the time and was great for watching video. The twist navigation was also a cinch.

But the 30GB Zune player sold for $249, the same price as the 30GB iPod. Microsoft should have discounted its first-generation player. Sales were sluggish and that hobbled the Zune's most interesting feature, the WiFi music sharing.

Welcome to the social? Hardly, as Zune owners discovered they were too few in numbers to actually ever find anyone to swap with.

The end came fairly quickly. In 2009, The Wall Street Journal reported that Zune holiday sales went from $185 million in 2007 to $85 million in 2008. The device was in a free fall in only its second full year on the market.

Last month, Microsoft announced the company had halted production of all Zune hardware. In truth, the Zune became irrelevant long before that. The Zune and Zune Marketplace never came close to challenging Apple.

And this is where all the similarities end between Microsoft and Google. Compare the Zune's few million hardware sales with the 200 million Android devices. When it comes to executing basic retailing, which confounded Microsoft, Google already operates a sophisticated transaction system.

What remains to be seen is whether Google will figure out interesting ways to tie Google Music to the company's powerful search engine or to YouTube, the Web's No. 1 destination for music videos.

In the near term, expect Google Music to sign Warner and add more features. In the long term, Google's music efforts are propelled by too many resources to be forced out of the game as quickly as Microsoft's.