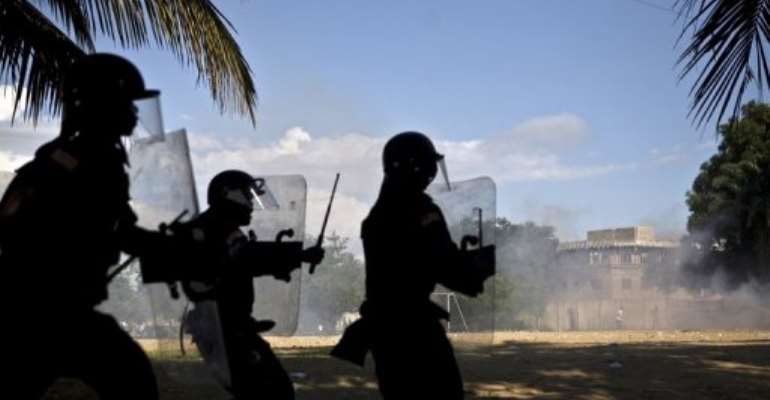 Liberian police officers surge towards the headquarters of the Congress for Democratic Change (CDC) in Monrovia. By Glenna Gordon (AFP/File)

MONROVIA (AFP) - Hundreds of Liberian opposition supporters gathered in Monrovia Monday for a funeral march to honour the victims of a police shooting that marred disputed elections earlier this month.

They gathered in front of the Congress for Democratic Change headquarters dressed in black and carrying palm leaves, a traditional symbol of grief, ahead of the march during which they planned to carry empty coffins.

"We have called on our supporters to gather at our party headquarters. We will gather and we will go ahead with a display of the symbolic coffins on the streets of Monrovia," CDC secretary general Acarius Gray told AFP.

Two weeks ago, on the eve of a November 8 run-off vote against incumbent Ellen Johnson Sirleaf, CDC leader Winston Tubman urged his supporters to stage a protest in support of the boycott he called on charges of fraud.

The United Nations Mission in Liberia has said that there were two deaths, but Tubman said up to eight people were killed.

"We will take to the streets with a display of coffins bearing the remains of unarmed civilians killed on the eve of our election. We don't need authorisation from the government to do this," Tubman told AFP last week.

However when asked Monday how many people would be buried, he said: "None, we had one body but the government took it away and so we will only be having a memorial burial today."

Tubman, a 70-year old former UN diplomat, is demanding the landslide victory of Nobel Peace Prize winner Sirleaf -- who took 90.7 percent of the vote in the run-off -- be annulled and fresh elections held.

Tubman pulled out claiming the first round of the vote was rigged but he has received little sympathy from abroad after international observers gave the election a clean bill of health.

The nation's second post-war poll was billed as a chance to cement a fragile democracy eight years after the end of a 14-year war which left some 250,000 dead but instead deepened divisions.