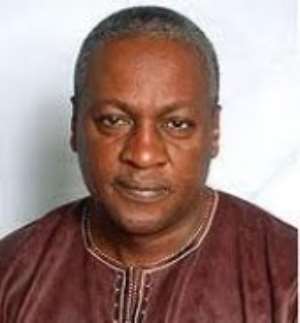 The Vice-President, Mr John Dramani Mahama, has urged Ghanaians to refrain from advocating the cancellation of the Computerised School Selection and Placement System (CSSPS) because of the difficulties with the selection of students.

He said the CSSPS might not be perfect but “we cannot throw away the baby with the bath water”.

Mr Mahama made the call at the 50th anniversary of the Sefwi-Wiawso Senior High School (SEWASS) at the school Saturday.

The school, which is the first secondary school to be established in the Western Region, has produced prominent Ghanaians, including the Asantehene, Otumfuo Osei Tutu II, a High Court Judge, Mr Justice Edward Amoako Asante, who chaired the function, and a Special Advisor to the Vice-President, Mr Kwesi Seinti Baffoe-Bonney.

The school, which started in September 1961 with three students, now boasts 1,000 male and female students with 62 teaching and non-teaching staff. It offers subjects including General Arts, Business, Science and Agriculture.

The Vice-President made reference to recent complaints about the selection and placement of students under the CSSPS by many parents and students with some calling for its abolition.

He said the people must “accept the challenge with cool head for us to have sufficient time to address the issue”.

He, therefore, urged teachers to make the teaching and learning of science and technology more practical and interesting to encourage more students to study the subjects.

The Vice-President said education was critical in the production of human resource, hence the government had made it the cornerstone of its development agenda.

To that end, he said, the government was investing heavily in the development of school infrastructure and making enough effort to achieve the Millennium Development Goals (MDGs) ahead of the 2015 target year.

He commended corporate bodies and old students for complementing the government’s efforts at improving infrastructure in schools.

Touching on SEWASS, the Vice-President said the school had produced prominent people who were contributing to the development of the country in many spheres of the country.

He again assured the school that he would request the Ghana Education Trust Fund (GETFund) to procure a bus for the school and connect the school’s computer laboratory to the Internet.

An environmentalist, Prof. Paul S. N. Buatsi, who was the guest speaker, said the duration of the senior high schools was not the chore issue of addressing poor standard of education at the secondary level.

He said the problem had to do with the kind of teaching offered at the basic level as the curriculum was too confusing to the pupils.

Prof. Buatsi, therefore, stressed the need for the country to put much emphasis on basic education and change the curriculum in a such a way that the pupils would understand the subjects and be well grounded for the secondary education.

The Headmaster of SEWASS, Mr K. Someah-Addae, expressed worry at the quality of students placed at the school by the CSSPS, and stated that 70 per cent of the students placed in the school this year had aggregates between 25 and 30.

Despite the challenges, he said, the academic performance of the school had been improving steadily over the years.

Mr Someah-Addae said last year out of the 354 candidates that the school presented for the West African Senior Secondary School Examination (WASSCE), 228 of them representing 64.4 per cent had passes between six and eight subjects, while 92 students representing 26 per cent had four and five passes.

The Omanhene of Ejisu, Nana Oguakro Afrane Okese IV, who represented the Asantehene, Otumfuo Osei Tutu II, stressed the need for the students to abstain from social vices and focus on their studies.