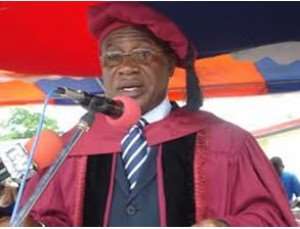 Winneba (C/R) Nov. 20, GNA -The University of Education (UEW), Winneba has opened 11 new Distance Education Centres, bring the number to 23 throughout the country.

The Vice Chancellor (VC) of the University, Professor Akwasi Asabere-Ameyaw who made this known named the centres as Dambai, Techiman, Tarkwa, Assin-Fosu, Obuasi, Sogakope, Accra, Axim, Kumasi, Nkawkaw and Mampong.

Prof Asabere-Ameyaw said this at the 16th Congregation of the University where a total of 5,946 Distance Education students graduated.

He said 3,865 students were awarded Bachelor's degrees while 2,081 received Diplomas.

The VC said there has been significant and consistent growth in distance Education student numbers.

Prof Asabere-Ameyaw said the UEW has acquired plots of land at Koforidua, Hohoe, Navrongo, Sogakope, Obuasi and Assini-Fosu to put up study centres while exploring the possibility of getting a place for the facility at Tarkwa and Sakumono.

“Our desire is to build world class study centres across the country to enhance delivery and to cut down the cost involved in travelling long distances by our prospective students to access higher education...”

The Chairman of the University Governing Council, Dr Emmanuel Kenneth Andoh expressed appreciation for the tremendous support the University was receiving from the Government, the Ghana Education Trust Fund, development partners and other benefactors.