Pope warns against corruption on second visit to Africa 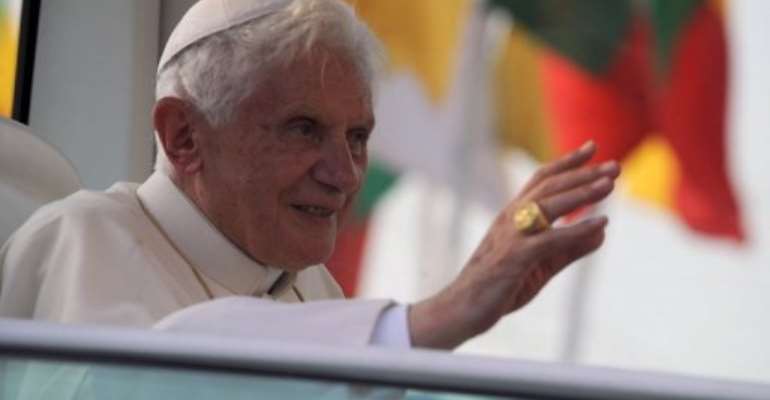 COTONOU (AFP) - Pope Benedict XVI on Saturday denounced corruption, warning it could lead to violent upheaval, while calling on African leaders not to rob citizens of hope on his second visit to the continent.

Benedict issued the call during a speech at the presidential palace in the west African nation of Benin, a voodoo heartland and Catholic bastion where thousands greeted him joyously as he arrived on Friday.

"At this time, there are too many scandals and injustices, too much corruption and greed, too many errors and lies, too much violence which leads to misery and to death," he said in a speech at Benin's presidential palace.

"These ills certainly afflict your continent, but they also afflict the rest of the world. Every people wishes to understand the political and economic choices which are made in its name. They perceive manipulation and their revenge is sometimes violent."

He added later in the speech before politicians, religious leaders and diplomats: "From this place, I launch an appeal to all political and economic leaders of African countries and the rest of the world.

"Do not deprive your peoples of hope! Do not cut them off from their future by mutilating their present!"

He also seemed to make reference to uprisings in the Arab world and spoke of the independence of South Sudan, Africa's newest nation.

"During recent months, many peoples have manifested their desire for liberty, their need for material security, and their wish to live in harmony according to their different ethnic groups and religions," he said.

"Indeed, a new state has been born on your continent. Many conflicts have originated in man's blindness, in his will to power and in political and economic interests which mock the dignity of people and of nature. Human beings aspire to liberty," the 84-year-old pontiff said.

Benedict was to travel later to Ouidah, a city heavy with symbolism as a centre of voodoo and which served as a major slave trading port.

While there, he is to sign a document seen as a roadmap for the Catholic Church in Africa at a time of religious tension and with evangelical movements making huge gains on the continent.

The main message of the document -- an apostolic exhortation called "The Pledge for Africa" -- will be peace, reconciliation and justice.

The document, a summary of the conclusions of a 2009 synod of African bishops, is also expected to refer to the problems of unequal development, corruption, rural poverty and the rise of an alternative Christian movement.

The pope may face questions over the Church's stance on condoms, after his comments on his first African trip to Cameroon and Angola in 2009 caused a global outcry when he suggested condom distribution aggravated the AIDS problem.

He has since seemed to ease that stance, saying in a book published last year that condom use is acceptable "in certain cases," notably to reduce the risk of HIV infection.

Sub-Saharan Africa is home to nearly 70 percent of the world's HIV cases.

The Vatican has also faced a major challenge from Pentecostal and other evangelical movements in Africa, with their lively, down-to-earth services seen by many as more relevant to their lives.