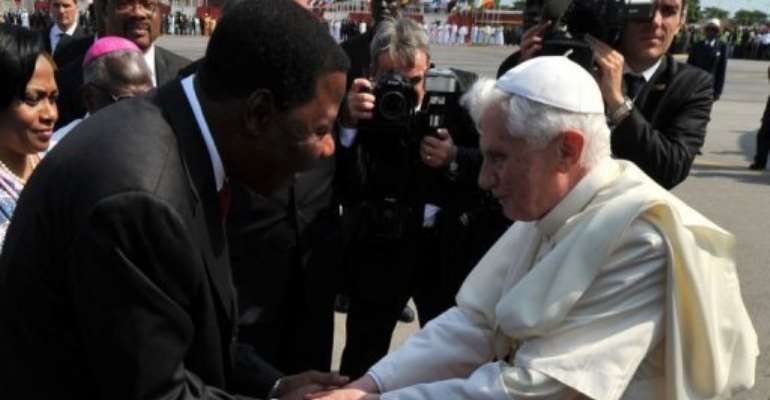 COTONOU (AFP) - Pope Benedict XVI arrived in Benin on Friday, marking his second visit to Africa in a heartland of voodoo and warning against "unconditional submission" to the laws of the market and finance.

Hundreds of residents welcomed Benedict at the airport, including women wearing skirts with his picture, and crowds cried out to him as he traveled through the economic capital Cotonou by popemobile.

Tens of thousands of Benin citizens as well as pilgrims from West Africa and beyond are expected to greet him during the three-day visit, which will culminate with a mass on Sunday in a stadium in Cotonou.

The visit is also to take the 84-year-old pontiff to Ouidah, a city heavy with symbolism as a centre of voodoo and which served as a major slave trading port.

"Modernity must not cause fear, but it cannot be built by forgetting the past," Benedict said in a speech after his arrival from Rome, the Italian capital enveloped in economic crisis.

"It must be accompanied by prudence in avoiding the pitfalls ... for example, the unconditional submission to the laws of the market or finance ..."

Benedict also spoke of avoiding "exacerbated and useless nationalism or tribalism that can become deadly, extreme politicisation, inter-religious tensions to the detriment of the common good or finally the erosion of human, cultural, ethical and religious values."

His trip is likely to bring into focus the enormous potential of many nations on a continent with the world's fastest growing number of Catholics, but also its numerous struggles.

The pope may face questions over the Church's stance on condoms, after his comments on his first African trip caused a global outcry when he suggested condom distribution aggravated the AIDS problem.

He has since seemed to ease that stance, saying in a book published last year that condom use is acceptable "in certain cases," notably to reduce the risk of HIV infection.

Sub-Saharan Africa is home to nearly 70 percent of the world's HIV cases.

The Vatican has also faced a major challenge from Pentecostal and other evangelical movements in Africa, with their lively, down-to-earth services seen by many as more relevant to their lives.

Benedict told journalists aboard his plane on Friday that the Roman Catholic Church "must not imitate" Pentecostal movements that have attracted hundreds of thousands of worshippers throughout Africa.

He added that such movements "have success, but little stability."

Benedict spoke of the Catholic Church as having a "participative liturgy, but not sentimental."

The Church "must have a simple, concrete, understandable message," he said.

Benin is seen as a stronghold of Catholicism, though voodoo beliefs often mix with Christianity in the country of some nine million.

The Benin Catholic Church has also dealt with a string of scandals involving priests recently, ranging from corruption to exorcism.

A Benetton advertising campaign launched this week threatened to divert attention away from issues related to the visit after controversy erupted over a photo montage showing the pope kissing a leading imam.

On Thursday, the Vatican said that it was taking legal action to prevent the publication of the photo montage that was part of the campaign.

Its statement came despite an announcement by the Italian clothing company that it was pulling the montage.

The highlight of the pope's trip will be the formal signing on Saturday of an apostolic exhortation called "The Pledge for Africa".

The main message of the exhortation will be peace, reconciliation and justice.

The document, a summary of the conclusions of the synod of African bishops in 2009, is also expected to refer to the problems of unequal development, corruption, rural poverty and the rise of an alternative Christian movement.