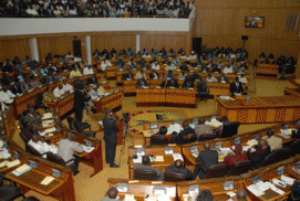 The Minority in Parliament has described the 2012 Budget presented to the House by the Minister of Finance and Economic Planning, Dr Kwabena Duffuor, as “a recycled bin and a package of unfulfilled and broken promises to win the support of the people in the 2012 elections”.

During the more than two hours that the minister used to read the 46-page budget statement, the Minority did not spare him the boos and jeers that have come to characterise the presentation of budgets.

The presentation of the budget began on a controversial note when the method adopted to lay the document was criticised by Members of Parliament (MPs) from both sides of the House.

Unlike in the past, yesterday the minister laid the document and the budgets for Parliament, the Judiciary and the Audit Service, but the MP for Sekondi, Papa Owusu-Ankomah, challenged the method and asked the leadership of the House to explain its action.

His observation and query were supported by the First Deputy Speaker and MP for Avenor-Ave, Mr Edward Doe Adjaho, and after more than 30 minutes of discussions, the motion was withdrawn for the House to go by the method that had been used to present budgets to Parliament since the beginning of the Fourth Republic.

Speaking to the media just after the presentation of the budget, the New Patriotic Party (NPP) MP for Tano North, Mr Ernest Akubuor Debrah, described the National Democratic Congress (NDC) government as “a talk-no-do government”.

He explained that he had come to that conclusion because in the 2009, 2010 and the 2011 budgets, the government pledged to construct fishing harbours at Elmina and James Town, in addition to the construction of landing sites at Dixcove, Axim, among other towns situated along the country’s coast.

“To date, not a single one has been constructed,” he said, and wondered whether the government would this time fulfill its promise to undertake those projects.

Mr Debrah stated that in 2008, the NPP government completed the feasibility studies and detailed designs on the Accra Plains Irrigation Project for the use of 5,000 hectares.

“In 2010, the government promised to commence work on the project. Nothing happened and the promise was repeated in 2011 without its implementation,” he said.

He said the government had taken Ghanaians for a ride and that was why it was bold to promise in the 2012 Budget that it would begin the construction of the first phase project, covering an area of about 10,000 hectares.

Commenting on the increase in the production of cocoa, Mr Debrah, who was the Minister of Food and Agriculture during the NPP administration, wondered why the government was patting itself on the back for that achievement.

He attributed the achievement to a number of measures, including the introduction of the mass cocoa spraying exercise, that had yielded results.

For his part, a former Deputy Minister of Finance and Economic Planning and MP for Dormaa West, Mr Kwaku Agyeman-Manu, said it was strange that the government was banking its hopes on the $3 billion Chinese loan for the financing of some of the projects in the budget.

He said unfortunately, the ability of the country to access the loan was gradually fading, since the International Monetary Fund (IMF) was poised to block access to the loan.

Mr Agyeman-Manu said the government was, therefore, repeating its old mistakes of lining up projects without any source of funding.

“I am not impressed; the budget is the same old thing. It cannot take us anywhere,” he said, and called for efficiency and transparency in the estimation of oil revenue, since Dr Duffuor’s explanation in the budget was not convincing.

The MP for Wenchi and former Deputy Minister of Finance, Professor George Gyan-Baffuor, said it was unfortunate that the government had painted a rosy picture in the budget to get votes in the 2012 elections and termed the budget “a propaganda budget”.

“If you listen to the budget and you are visiting the country for the first time, you will think that everything is fine on the streets,” he said.

He challenged the government to industrialise the economy, instead of depending on proceeds from the sale of raw cocoa beans, gold and oil, explaining that until that was done, the country would not be able to expand the economy and create more jobs for the youth.

On taxes, he said it was unfortunate that while the government used the budget to reduce taxes on corporate entities, it increased the tax burden on the poor.

and would be able to judge the NDC by its deeds.
“The NDC cannot claim credit for the growth in the country’s GDP 13.4 per cent in 2012, since it was due to the revenue accruing from the sale of oil, which is a one-time growth and will not be repeated,” he said.

But the Chairman of the Finance Committee of Parliament, Mr James Klutse Avedzi, explained that the budget would give hope to Ghanaians, since it did not burden the poor with too many taxes.

He explained that the government was using the budget to seal the loopholes in the country’s tax administration in order to rake in more money to enable it to embark on more projects aimed at improving the lives of the poor and the deprived.

He pointed at measures such as refencing, transfer pricing and the increase of the corporate tax rate from 25 per cent to 35 per cent as some of the brilliant measures that had been introduced in the budget.

For his part, the NDC MP for Juaboso, Mr Sampson Ahi, said the budget “is a retirement package for Nana Akufo-Addo”, explaining that the budget summed up how poised the government was improving on the living conditions of the people.

“We will work hard to fulfill our promises and win the 2012 election to retire Nana Akufo-Addo from politics,” he said