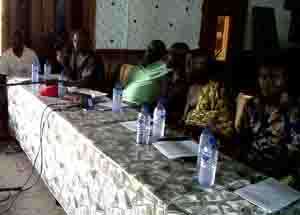 THE YOUTH of Agogo in the Ashanti region have sneered at an alleged decision by the Paramount Chief of the area, Nana Akuoko Sarpong to allocate a different tract of land to accommodate Fulani herdsmen.

AYA Chairman, Emmanuel Buabeng who read the statement on behalf of the association said the paramount chief had allegedly entered into a secret agreement to accommodate six cattle owners including Alhaji Grunsah, bankroller of King Faisal Football Club on a different piece of land.

He noted that the Fulani herdsmen who have raped, wounded and killed residents of the area were currently occupying lands in the southern part of Agogo stool lands but Nana Akuoko Sarpong wants to relocate six of them to the northern sector.

'In any case, the cattle owners have places they come from, so why can't they send their herd of cattle to where they come from but insist on operating in Agogo?' he asked.

Mr. Buabeng asked Nana Akuoko Sarpong to revoke the  alleged agreement with the six cattle owners in his own interest because the AYA was prepared to deal ruthlessly with him if he failed to do so.

He also charged the paramount chief, who is also a council of state member to withdraw his lawsuit against the Fulani herdsmen which is currently pending before a Kumasi High Court.

The chairman revealed that the staunch National Democratic Congress (NDC) member dragged the Fulani herdsmen to court for flouting the terms of the agreement regarding their settlement in the area.

Mr. Buabeng noted that Nana Akuoko Sarpong accused the Fulani herdsmen of failing to fence their herd of cattle and provide water for them as agreed upon prior to their settlement.

He said security personnel detailed to the area to supervise the eviction of the Fulani herdsmen by the national security coordinator have been unable to relocate them due to the pending court issue adding the aliens were using it as an excuse not to leave.

Mr. Buabeng alleged the paramount chief deliberately dragged the Fulani herdsmen to court to thwart attempts to evict them.

'All we are asking for is that the Fulani herdsmen have already caused so many atrocities therefore dragging them to court at this time is totally unnecessary. We demand that Nana Akuoko Sarpong withdraw the case for the security personnel to drive them away from our land,' Buabeng noted.

He added that AYA would make life unbearable for the paramount chief if he refused to withdraw the case from court.

He also criticized the opposition political parties for keeping mute about their struggle, saying these parties would have organized a series of press conferences to make their voices heard if this was a different matter.

'We are saddened that the opposition parties have decided to keep quiet on this sensitive national issue. Are they telling us that they are not concerned about the raping of our women, wounding and the killing of our people by these Fulani herdsmen?' Buabeng questioned.