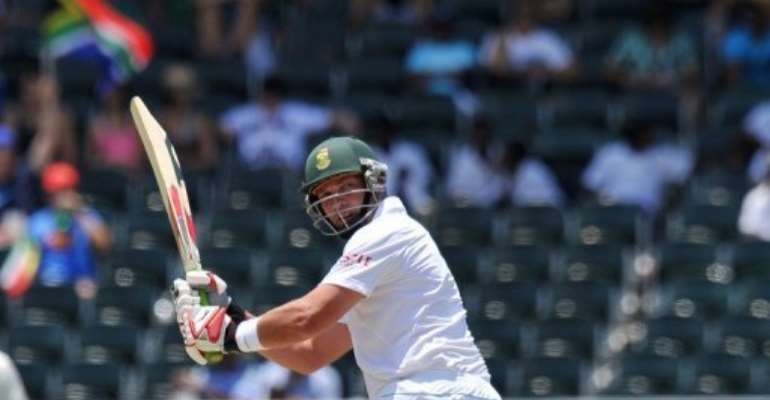 Jacques Kallis plays a stroke for South Africa against Australia at the Wanderers Stadium in Johannesburg today. By Alexander Joe (AFP)

JOHANNESBURG (AFP) - South Africa scored rapidly but lost four wickets before tea against a depleted Australian bowling attack on the first day of the second and final Test at the Wanderers Stadium on Thursday.

South Africa were 213 for four at tea, failing to take full advantage of ideal batting conditions as they sought to bat Australia out of any chance of levelling the series.

Jacques Kallis struck an impressive 54 off 41 balls before he was out tamely, chipping Peter Siddle to mid-wicket, while AB de Villiers was unbeaten on 51 at the interval.

Kallis' dismissal ended a second-wicket partnership of 80 with Hashim Amla that enabled South Africa to recover from 43 for two after losing both their openers.

At 129 for four, South Africa had squandered the advantage of winning the toss but De Villiers and Ashwell Prince (34 not out) put on an unbeaten 84 for the fifth wicket.

Australia suffered a blow when all-rounder Shane Watson was unable to complete his fourth over and had to leave the field with a hamstring injury before lunch. He did not reappear before tea.

The visitors were already without Ryan Harris because of a back injury.

Before the setback, Watson had taken the wicket of Jacques Rudolph, caught behind for 30.

The first breakthrough was made by Mitchell Johnson, who had Graeme Smith caught at second slip for 11.

Teenage debutant Cummins generated impressive pace and deserved to take the wicket of Amla, although he showed signs of flagging when he came on for his third spell shortly before tea.

At 18 years and 193 days old, Cummins became the second youngest Australian Test player after Ian Craig, who was 17 years 239 days when he made his debut, also against South Africa, at Melbourne in 1952-53.

Kallis joined Brian Lara of the West Indies as the fourth highest run scorer in Tests when he hit the first ball he faced from Watson through the covers for four to take his total of runs to 11,953.

He took sole possession of fourth place when he scored a single in Watson's next over.

Kallis reached a 37-ball fifty with a flick for six off Siddle and a four in the next over took him past 12,000 runs in Tests, only for him to be out to the next ball.