Voting By Our Prisoners 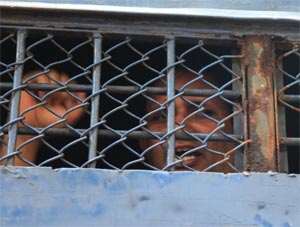 It is official. Our prisoners are going to vote in the 2012 elections.

In 2010, the Supreme Court asked the Electoral Commission to take steps to make it possible for prisoners to vote. Since then, the EC has stated that it plans to comply with the ruling. On November 8th, at Ankaful in the Central Region, the President, His Excellency Professor Atta Mills, according to the Daily Graphic, 'urged the Electoral Commission to take the necessary steps to comply with the Supreme Court ruling which has given prisoners the right to vote.'

In the days that followed, spokespersons for the President and the NDC stressed the President's respect for the rule of law and the Supreme Court, as one of the key reasons why the President urged compliance with the court ruling. That claim, unfortunately, does not stand up to scrutiny. The President had no problem condemning the court ruling on the Dagbon issue and expressing his sympathy for those who were aggrieved.

Before moving on to discuss the merits of this case, the haste with which it has been embraced, juxtaposed with the vehemence with which ROPAL was denounced in NDC quarters, gives the unfortunate impression that we value our citizens behind bars more than those abroad. That is unfortunate.

The Supreme Court is a venerable institution that deserves our respect and support. Indeed, I believe that we do our nation and the rule of law a great disservice when we allude to 'ways of killing cats' and declarations of 'no courts', not to talk of 'Fiat Campanolas' while discussing our courts. However, as Chief Justice Georgina Wood has repeatedly claimed that the court welcomes criticism, I will take her up on this one.

Let me begin by confessing that I am a layperson and that my reasoning is not encumbered or refined, depending upon one's point of view by 'wherefores', 'I put it to yous' and a bunch of Latin words.

Unlike many others, I do not believe our Supreme Court is infallible. Indeed, as an American Supreme Court Justice once put it, 'We are not final because we are infallible—we are infallible because we are final'. To support what that jurist said, even the US Supreme court have had to, on occasion,  ignore precedent and reverse itself. One example was the reversal of the 'Separate but equal' implicit in the 'Plessey versus Ferguson' decision decades later in the 1954 'Brown vs. Board of Education' decision that ended segregation in American education.

It appears to me, upon careful scrutiny, that the court's decision was long on high-minded principle but a little short on practicality. Unfortunately, this is not the first time the Supreme Court, guided by good intentions, has over-reached. In 2008, the court banned the use of pan latrines in Accra on the grounds that its use was an affront to human dignity. It directed the Accra Metropolitan authorities to arrest and prosecute violators and asked the government to build more public latrines. As a physician, while I applauded the court's intent, it was hard to see how using 'free range' after your pan latrine had been banned, was more dignifying than using the pan latrine. Wisely, not much happened after that ruling.

The issue of voting by prisoners is one that has engaged many authorities and countries in the world. Currently in the United States, about 5 million convicted people cannot vote. These include people in prison, on parole and on probation. In Europe, according to a paper by the American Civil Liberties Union in 2005, 17 countries have no ban on prisoner voting. Twelve, including Britain, Spain and Russia, bar all prisoners from voting. The rest permit some but not all prisoners to vote.

Indeed, in view of his recent championing of gay rights that has irked Ghanaians so much, it is interesting that British Prime Minister Cameron was not happy when the European Court of Human Rights ruled that Britain's blanket ban on prisoner voting must end. Mr. Cameron declared, 'I don't see any reason why prisoners should get the vote. This is not a situation I want this country to be in.' In the House of Commons, the motion against prisoner voting passed, 234 to 22. So much for championing human rights.

Before getting into my beef with the Supreme Court, let me make a few things clear.

I have nothing against granting prisoners their rights. Some of the greatest leaders on earth have been prisoners at one time or the other. Amongst these are Nkrumah and Mandela. Indeed, as I will show later, I believe that if we were truly interested in the welfare of prisoners, there were more important things we could have done for them besides getting them the vote.

My first concern about the prisoner vote is which constituency they belong to. Will their votes for Parliament be counted in the constituency in which they are imprisoned or the one from which they were imprisoned? If they can only vote in Presidential elections, is that an abridgement of their rights? Is it right for thousands of prisoners who have no interest in the Komenda-Edina-Eguafo-Ebirim constituency to affect the outcome of elections there?

Second, will they be susceptible to subtle coercion by the government in power. For instance, could prison officers give prisoners the impression that voting a certain way would bring them benefits? Can ministers have access to prisoners while pretending to inspect the prisons while opposition parties are barred from the prisons on security grounds? While I will not accuse the current President and his government of such intent, we must protect against the possibility that others may do this in the future.

Third, given the security problems we had in 2008 and the fact that many prison officers were needed to provide security during voting day, can we handle the added security of prisoners voting? How will the parties get their message to the prisoners? Will there be 'Prisoners for Nana' (PRIFONA) as well as 'Friends of Mills' (FRIMIP) in our prisons? How will these groups be regulated? Since even the law-abiding GAME and FONKAR got a little violent at times, could there be prison riots? Can the Mills group threaten to get a prison officer fired, just like other foot-soldiers have done to other officials?

Fourth, how much will all this cost? Can the nation that cannot afford to equip its hospitals or pay teachers a decent wage afford this?

Fifth, if we polled our prisoners about their needs, would voting be top of their list? Is this exploitation or empowerment? Our prisoners lack adequate counsel. Many languish in jail for years because their dockets are lost. Many end up in prison because they could not afford counsel. They live in overcrowded conditions. Their food is bad.

If we wanted to help our brothers and sisters in prison to vote, the best way to do so is to help them get out of jail and to get their freedoms—including the right to vote back.

If our civil societies and our courts want to take up the cause of our prisoners, let us help them get adequate counsel. Let us get them speedy trials so that the innocent amongst them can regain their freedom.

I bet that if our prisoners were free to VOTE on the best use of the money that would get them the vote, they would VOTE for something else.

I will be the first to admit that it is possible to fashion reasonable solutions to most of the issues that I have raised. However, even if we concede that point, should the unelected Supreme Court be the body to address these problems?

It would appear that the intent of the constitution must be actualized by our law-making body, Parliament, in consultation with the Electoral Commission, the Political parties and the security forces. That is how a democracy must operate. What will be the role of Parliament in all this? Is the use of whatever it would cost us to have prisoners vote be worth it?

Our actions as a nation sends many messages and signals about who we are.

When we let prisoners vote while our diasporans cannot vote, it gives the unfortunate impression that we are more interested in the rights of our prisoners than the rights of our brethren abroad. That is an unfortunate impression and it undermines the empty words about how much we value our brethren abroad as partners in our development. They certainly deserve better.

When we spend our scarce resources to get our prisoners who need speedy trials and good food and better housing to vote for us instead of to meet their needs, we risk giving the unfortunate impression that we certainly lack compassion and may lack commonsense as well.

The way forward, in my view, is for the Electoral Commission to shelve this ruling and for our nation to place voting by prisoners in the queue behind voting by diasporans and meeting the real needs of our people, including those in prison.