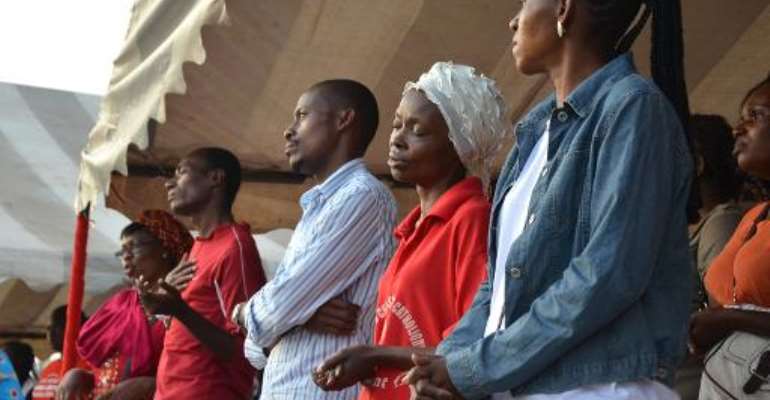 Members of the Catholic Charismatic Renewal church pray in Owendo, on the outskirts of Libreville, Gabon, on September 18, 2014. By Celia Lebur (AFP/File)

Owendo (Gabon) (AFP) - "Is anybody here baptised?" cries the preacher. "Amen!" roars back his flock as it sways to a hypnotic drum beat, part of a push by African Catholics to win back believers seduced away by the fast-growing Evangelical movement.

Hundreds in Gabon have responded to the call of the Catholic Charismatic Renewal, a movement born in the United States in the 1960s, and leading a month-long campaign in the west African country to bring "lost sheep" back to the fold.

At the rail station in Owendo, on the outskirts of Libreville, it is not a priest but laymen and women who take turns on stage to sing the Lord's praises to a devoted audience.

"God loves us," cries an elderly woman with her arms high in the air, raising a cheer from a dancing, chanting crowd -- the scene a far cry from the austerity of a traditional Catholic mass.

Alain Franck, a rail worker heading home after a day's work, can barely believe his eyes.

"You say these are Catholics? Well I say. To see them you would think they're 'born agains'," he said, in a nod to the Protestant Evangelicals making converts across the continent.

"But if the pope is happy with this, well that's great!"

"Some say the Catholic Church has fallen asleep," said one young follower who gave her name as Orianna. "So we are out in the street to say we are here! With the Renewal, we can sing, and dance."

Outside the two prayer tents at Libreville station, two "mamas" are there to welcome newcomers.

"We have to get rid of this notion of God as a policeman... The Church is not all about forbidding sins and sadness," said the Renewal's coordinator in Libreville, Claude Mitoukou.

"'Go to the street corners and invite to the banquet anyone you find'," he said, quoting from the Bible.

Christians make up some 80 percent of Gabon's population, with around two thirds of them Catholics.

But Evangelical Protestant churches have been making gains, as elsewhere in Africa.

Mitoukou says his message has been getting across, loud and clear.

"Many people who had strayed from the path have come back to us, because they can relate to the way we worship and pray, and to our more personal relationship with God.

Orianna and her fellow Charismatics are fired up against the Evangelical movement -- and its sometimes controversial preachers.

One of them, Nigeria's TB Joshua -- who claimed to work miracles and raise the dead -- was thrust into the spotlight this month when at least 115 people died in a collapse at his mega-church in Lagos.

Closer to home, in Gabon's neighbour Cameroon, the government last year ordered the closure of around 100 Pentecostal, or Evangelical churches accused of extorting funds from their members.

"We belong to the Catholic Church and we live our faith according to the rules, not like those peddlers of illusions you see all over the place," said Orianna.

While loyal to the pope, the Charismatic Renewal movement -- named after the Greek word for gifts, "charismata" -- allows for prayer sessions outside of mass which can involve faith healings and speaking in tongues.

Founded in 1967 by a group of US students on a prayer retreat, the movement is present in over 200 countries and has "touched the lives" of over 120 million Catholics, according to the Vatican-approved umbrella body the International Catholic Charismatic Renewal Services (ICCRS).

As Cardinal Jorge Mario Bergoglio, Pope Francis himself would celebrate mass on a monthly basis for the Charismatic Renewal of Buenos Aires.

The Renewal first appeared in Gabon three decades ago and now has a presence in every parish of the capital.

Brigitte joined the movement 15 years ago.

"With traditional Catholics, you go to mass on Sunday and that's that. We on the other hand meet during the week to pray."

"If we have a problem in the family, with our children -- our 'shepherd' is there to listen and counsel us. We feel less alone," said Brigitte.

As night falls, the mood at Libreville station turns electric.

Fired up by the chanting of praises, many in the congregation have entered a transe-like state, calling out to God, their voices raised higher and higher.

A woman in her 40s begins to shake all over, and collapses.

"She is touched by the Holy Spirit," whispers Orianna, visibly moved, as security officers run over to assist the woman on the floor.

Followers see the Renewal as an antidote to the lure of Evangelicalism, offering an overt spirituality and a return to a rejoicing mode of primitive Christianity.

But Germain, a member of a local Evangelical church, was not convinced.

"They are trying to copy us," he sniffed, as he eyed some little Virgin Mary icons for sale at a Libreville stall.

"But when it comes down to it, we don't agree on the fundamentals, on their Mary and all their saints."