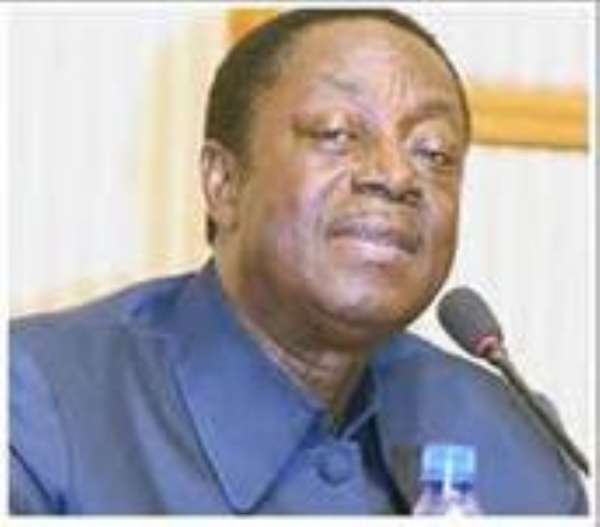 Accra , Nov 16, GNA -The Industry Sector recorded the highest growth of 36.2 per cent this year, due mainly to the coming on stream of oil production, Dr Kwabena Duffuor, pointed out when he presented the 2012 budget statement in Accra on Wednesday.

He however said the Services Sector continued to be the largest contributor to the country's Gross Domestic Product (GDP), accounting for 48.1 per cent in 2011

Dr Duffuor said a major objective of the 2011 Budget was to continue the progress in fiscal consolidation to support macroeconomic stability.

“To this end, the Budget set a fiscal deficit target of 5.1 per cent of GDP to be achieved by strengthening expenditure management, and enhancing revenue mobilization.”

He said total revenue and grants for the first three quarters of the year amounted to GH¢8,798.2 million compared to the budget target of GH¢8,119.9 million. This represented an increase of 8.4 per cent over the target.

The high growth in revenue and grants was the result of improvements in tax revenue administration.

For the first three quarters of 2011, domestic revenue totaled GH¢8,177.0 million, an equivalence of 14.4 per cent of GDP. This amount, the Finance Minister said, was 15.9 per cent higher than the budget estimate of GH¢7,055.0 million and showed a significant improvement in domestic revenue mobilization.

Dr Duffuor said during the first three quarters of the year, the disbursement of programme grants was 1.6 per cent lower than the target of GH¢248.4 million.

“For project grants, the disbursement was 46 per cent lower than the target of GH¢663.8 million. Grants disbursement is expected to reach GH¢984.4 million by the end of the year, which would be 26.8 per cent ,lower than the budget estimate of 1,346.5 million,” he said.

he indicated that Ghana's economy had witnessed significant growth and stability since 2009.

The huge fiscal and external current account deficit that characterized the pre-2009 period had been reduced significantly; inflation had dropped to single-digit levels; the stock of international reserves had risen to over three months of import cover; and the exchange rate had stabilized since August 2009, except for some minor volatility earlier in the year, he added.

Dr Duffuor noted that real GDP growth had been very strong while the rebasing and revision of the national accounts saw the country's national income expanding by more than 60 per cent, moving the country into a lower middle-income status.

The Finance Minister said a combination of fiscal consolidation and disinflation had underpinned the country's strong macroeconomic performance in recent years, especially in 2011.

“Through a strong growth in domestic revenue and prudent expenditure management, the country was on track to achieve the fiscal target set for the year.”

During the year, the Bank of Ghana reduced its policy rate twice as inflation dropped to a single digit, while export growth, especially of cocoa and gold had been impressive, while oil export came on stream, he said, adding that the external current account deficit widened in 2011 due to a strong import growth.

He said provisional GDP estimates released by the Ghana Statistical Service in October 2011 indicated that in real terms, the economy would expand by 13.6 per cent in 2011 compared to the growth of 7.7 per cent in 2010.

Dr Duffuor was happy about the agriculture sector which expanded by 2.8 per cent and said the cocoa sub-sector grew by 14 per cent.

“The remarkable growth in the cocoa sector is due mainly to policy interventions, such as the provision of subsidized fertilizers, supply of early bearing and high-yielding planting materials for rehabilitation of old farms, and timely payment of remunerative producer prices and bonuses, as well as the hard work of cocoa farmers,” he explained.

He noted that the country achieved its target of one million metric tonnes of cocoa production for the first time this year ahead of the 2012 schedule.