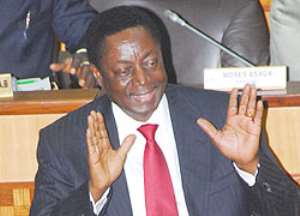 Accra, Nov.16, GNA – Dr Duffour has said that due to the rebasing and revision of the national accounts, the country became a lower middle-income country which has resulted in a reduced tax revenue-to-GDP ratio from 22 percent to 13.1 percent in 2010.

He said this when he presented the 2012 budget statement to parliament adding that “the country's estimated tax revenue-GDP ratio of 16.5 percent for 2011 indicated a strong improvement in revenue mobilization which was above the average for sub-Saharan African countries and below the average for lower middle-income countries”.

Dr Duffour said the country needed to sustain the revenue mobilization efforts in view of the huge funding requirements to close the infrastructure gaps.

He said “the focus of revenue management in the 2012 fiscal year is to expand the tax base and improve the efficiency of the tax administration”.

He emphasized that tax proposals on taxation of professionals and informal would take effect in 2012.

He said the increase in VAT threshold would improve efficiency in tax administration, thus there would be an increase in the VAT registration threshold from an annual turnover of GH¢ 90,000 in 2011 to GH¢120,000.00 in fiscal year 2012.

He said “businesses with a turnover of less than GH¢120,000.00 over a twelve month period would pay a presumptive tax of six per cent of turnover”.

He said the taxpayers would fall within the category of small taxpayers and the Ghana Revenue Authority (GRA) would put in place the necessary measures to operationalize the small taxpayer office concept and that it does not mean an increase in the VAT rate.

He said the Ghana Revenue Authority had drafted regulations to strengthen existing tax legislation to deal with taxation of multinational companies and minimize the incidence of the abuse of transfer pricing.

Dr Duffour said the GRA would embark on a registration and re-registration exercise of tax payers and encouraged all tax payers to take advantage to register as the tax amnesty would start from January 2012 and end on 30th September 2012.

He said the implementation of the VAT refunds and duty drawbacks had been problematic in the past, saying that in 2012, adequate measures would be put in place to address the problem.

Dr Duffour said as part of the tax administration reforms, the GRA would adopt an accounting system that would allow taxpayers to offset such refunds against other tax obligations.

On natural resource taxation, he said, 'although mining is one of the leading sectors in the country, the economic and social benefits that the sector provides do not meet our expectations', adding that lack of transparency and the need for incentives to reform the extractive industry have contributed to this state of affairs.

He said the environmental degradation resulting from mining operations had also imposed additional costs to the country.

Dr Duffour said in the fiscal year 2012, the following changes to the taxation of mining activities will apply and these include: the corporate tax rate for mining companies would be increased from the current 25 percent to 35 percent; a windfall profit tax of 10 percent would be collected from all mining companies; and a uniform regime for capital allowance of 20 percent for five years for mining, as is the case in the oil and gas sector.

He said the principle of Ring-fencing as applicable to the natural resource sector (petroleum and mining) would be made more explicit, saying that the cost in one contract area or site would not be allowed to be offset against profits from another (belonging to the same company) in determining chargeable income for tax purposes.

Dr Duffour said as part of the measures to protect the environment, the government had reduced the environmental tax of 20 percent on plastic packaging materials and products to 15 percent in fiscal year 2012 with exemptions for the pharmaceutical and agriculture sectors.