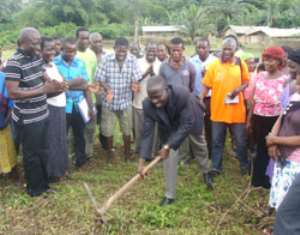 The Ellembelle   District has benefitted  from the Ghana Social Opportunities Project (GSOP), a programme designed by the government to extend assistance to people in deprived communities.

Ellembelle is the only district in the region which has benefited from the programme, which is serving about 40 districts, mostly located in the northern and central parts of the country.

Eshun was optimistic that the project, which is the construction of a teacher's quarters in the community, would enable teachers to accept postings to the area.

The Co-ordinator of the Kumasi operational office for the project, Mr. Charles Nayram, explained that officers of GSOP had a meeting with the community, which among their numerous needs, settled on the construction of a teachers quarters for the area.

According to him, the project was a community-based one, which involves the participation of the community, adding that labour, materials, personnel, and other logistics needed for the project are drawn from the beneficiary community.

The Capacity Building Specialist of GSOP, Mr. Jojo Thompson, pointed out that the project, which is expected to be completed in three months, is using a tool known as Rapid Result Initiative (RRI), which has all stakeholders on board to ensure the timely completion of the project.

He explained that the project was to create employment for the vulnerable and people in rural communities, adding that it was the first time the region was benefitting from the GSOP project, and that based on the success at Akropong, the programme would be extended to other communities in the region.

Mr. Thompson, therefore, prevailed upon the Akropong community to put up their best for the success of the programme, adding that the project was expected to be completed at the cost of about GH¢110,000.

In another development, about 95 participants from seven area councils in the district have undergone a two-day training programme to equip them with knowledge and skills for effective leadership at the local level.

Mrs. Faustina Essandoh-Yeddu, one of the resource persons from the Institute of Local Government Studies (ILGS), indicated that the programme would take the participants through lectures, questions and answers, case studies, and suggestions and recommendations.

She explained that the training would enable the participants get to know the District Assembly system, as well as roles and functions of zonal, area and town council members.

She further explained that it would give the participants techniques in local revenue mobilisation, as well as conflict management at the local level.

The District Chief Executive, Daniel K. Eshun, called on the participants to take the training serious, adding that they should make good use of the knowledge they would acquire from the programme.

He prevailed upon them not to meddle in chieftaincy disputes, and wished them well in their training.

He also called on them to make communal labour and revenue mobilisation a key component of their work, to contribute to the efforts of the Assembly.