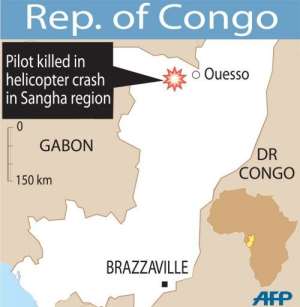 "An M18 helicopter crashed while landing in the region of Bandondo (800 kilometres/500 miles from the capital Brazzaville). The accident was caused by poor weather conditions," said Colonel Cyr Patick Morapenda.

The Russian pilot "died immediately" and three others had "slight injuries", said the colonel.

The pilot was "on a public service mission to collect geologists from the Australian mining company Congo Mining", he said.

The heavily forested Sangha area is also rich with diamond and gold mines.

In June 2010 a plane travelling from Yaounde, Cameroon crashed in the same area, 30 kilometres (20 miles) from the mining town of Yangadou.

Among the 11 killed were one of Australia's richest men, Ken Talbot, and Geoff Wedlock, a director of another Australian mining company, Sundance Resources.

Teachers Are Better Off Under NPP Than NDC — Education Minis...
23 minutes ago

COVID-19 Still With Us, Follow Protocols – Okoe Boye To Ghan...
31 minutes ago