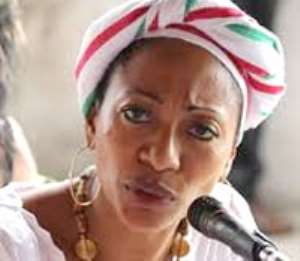 When the Convention People's Party (CPP) went to the polls last September and elected Samiah Yaaba Nkrumah, daughter of the founder of the party, who led Ghana to independence on the wings of the cockerel family, it was seen as the beginning of the revival of the party.

Barely two months after the grand event in the national capital, internal wrangling is threatening to destroy the fledging foundation of the party.

Across the length and breadth of the country, CPP activists, particularly the youth, are accusing the new leadership of subverting the party's constitution they have sworn to protect.

The youth wing of the party in the Greater Accra Region, has issued an ultimatum to the party to call an early congress to elect a flagbearer to contest the 2012 presidential elections.

According to Mr. Ben Oteng, who angrily spoke to The Chronicle, the party leadership had two weeks ultimatum, beginning from yesterday, to respond to their demand, or risk one of three things.

Firstly, the youth would demand the removal of the entire executive. Secondly, they are also threatening to take their grievances to the streets of the national capital if their demands were not adhered to.

In the worst case scenario, they would vote for any other party, other than the CPP, at the next elections. 'We cannot wait until the very last moment to elect our flagbearer, and risk getting one percent of the popular vote,' Mr. Oteng said.

From Yamouransa Ahenkoro in the Central Region, Mr. Adu Amoah, Central Regional Youth Organiser of the party, was even more scathing in his attack on the new leadership.

'The CPP is behaving as though we are not interested in the 2012 elections. We have barely one year to go. Both the NPP and the NDC have their presidential candidates already campaigning.

The NPP, for instance, have fielded their parliamentary team already. We have not even started the process. There is no indication as to when we would do so.

'Meanwhile, the new executives are burying their heads in the sand, as if there is no urgency.' He said the party was violating its own constitution, which demands that presidential candidates ought to be chosen two clear years before the presidential vote.

Mr. Kwame Murtala, Northern Regional Youth Organiser, told The Chronicle that the regional executives would soon issue a press release on what he called the delay in getting the process of choosing the presidential candidate and parliamentary aspirants. 'It is as if we have abandoned our responsibilities to the people of Ghana.'

In Kumasi, the party members have gone a step further. A group calling itself Concerned Delegates in Ashanti, called a press conference yesterday, and accused the leadership of violating the party's constitution, as a result of its apathy towards the holding of a National Delegates Conference to elect a flagbearer for the 2012 presidential election, reports Sebastian R. Freiku .

They referred to Article 78, Clause Three of the Constitution of the CPP, which states: 'The National Delegates Conference shall be held, at least, twenty four (24) months before the next presidential and parliamentary elections,' and said the decision, as announced by the General Secretary, Mr. Ivor Greenstreet, that the election of the flagbearer would be held 'sometime next year,' was unconstitutional.

Mr. Nkrumah Acheampong, Kwabre West constituency chairman and spokesman of the group, reminded the leadership that the decision was 'unlawful and an unconditional breach of the CPP constitution.'

He said the infringement, coupled with the apathetic approach of the leadership, show ineffectiveness and a total disregard and contempt for the mass of the party's following, who approved the provisions of the Constitution at the recent Delegates' Congress in Accra.

The concerned delegates lamented on the inability of the newly-elected national executives to positively decide, or fashion out the way forward towards achieving the aims and ideologies of the party.

They called on the Council of Elders to prevail on the Central Committee and national executives to adhere to the provisions of the constitution and elect a flagbearer, and fix a date in December for the presidential primaries, since the other parties had already elected their flagbearers.

The concerned CPP delegates reminded the national executives that the election of a flagbearer should be held to give enough time to organise all polling stations and wards for effective organisation and campaigning.

The delegates directed the national executives to return whatever monies they might have taken from other political parties to enhance their (other political parties) chances for the 2012 general elections, because the CPP cannot be sacrificed on the alter of selfishness, greed, and provincial interest.

They have also called on the National Chairperson of the party to come out with an explanation as to why the party was concentrating on the parliamentary candidates at this crucial time, at the expense of a flagbearer, who needs to tour the country and campaign.

Reacting to the concerns of members across the country, Mr. Ivor Greenstreet said the party needed to put structures in place before jumping into the presidential fray.

'In 2000, 2004 and in 2008, we got only about one percent of the popular vote. Obviously, this stems from the fact that the party is not firmly on the ground. We have got a new chairperson.

Samiah Nkrumah is using her charisma to revive the party. We need to rally behind her and use the visibility she is bringing to the fortunes of the party to rebuild.'

He said the call, through the media, was pre-mature. 'None of those making those agitations has written to us.'

He advised members of the Cockerel Family to unite behind the leadership. 'We need to improve on our lot. But we cannot do it through accusations in the media

'We have to come together and improve our representation in Parliament,' he asserted, but just stopped short of accusing a leading member of master-minding the agitations.