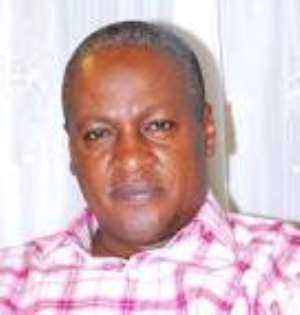 Mankuma (NR), Nov 15, GNA - Vice President John Dramani Mahama has inaugurated electricity projects in three communities in the Northern Region at a total cost of GHC 284,000.00, with a call on them to initiate small scale industries.

"The electricity the government is providing is not for only domestic use but to also support those of you who are artisans to do your work faster than the manual system you practised before the lights."

Vice President Mahama who made the call while inaugurating the projects at Makuma, Mandari and Banda-Nkwanta all communities in the Bole District, said it was not enough for them to embrace the electricity for only lightening purposes.

"For those of you who are welders, vulcanizers and traders, I expect you to expand your trades with the coming of electricity in your community," he said.

The three, projects which covered a total of 19.5 kilometres of high voltage poles and 327 low voltage poles, were funded by the Ministry of Energy.

On security, Vice President Mahama called on community members to expose all those engaged in armed robbery to reduce the high rate of highway robberies between Bole and Bamboi.

Mr Moses Mabengba, the Northern Regional Minister, said the provision of electricity to the communities was part of President John Evans Atta Mill's 'Better Ghana" agenda and promised that most communities would receive their share of the national cake in due course.

"Under the "better Ghana" agenda, you will not need to be in Accra, Tamale or Bole, your district capital, to enjoy it. It is right here in your own community for everybody to see, what the government is doing," he said.

In all the three communities, the chiefs appealed to government to provide them with potable water, good roads, post offices and police stations.