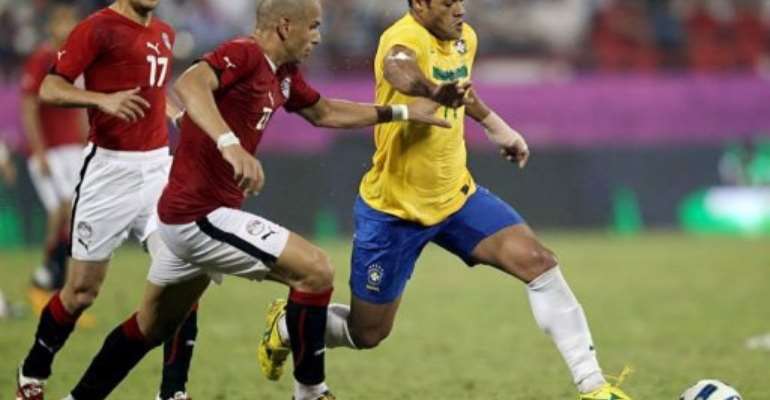 Givanildo Vieira (R) of Brazil vies for the ball with Wael Goma of Egypt (L) as player Ahmed Hassan (back ) looks on. By Marwan Naamani (AFP)

DOHA (AFP) - Egypt midfielder Ahmed Hassan equalled the world record for national team appearances on Monday when he came on as a substitute in the 2-0 friendly loss to Brazil in the Qatari capital.

Hassan replaced Hosny Abd Rabou on 73 minutes to join retired Saudi Arabia goalkeeper Mohammed al-Deayea on 178 caps -- one more than Mexican Claudio Suarez, another star who has hung up his boots.

When first-choice captain Hassan ran on to the pitch to take up a position on the right side of midfield, he was handed the armband by stand-in skipper and veteran defender Wael Gomaa.

Hassan, a 36-year-old who played in Turkey and Belgium before returning to his homeland three years ago, saw little of the ball against the dominant Brazilians who won through a brace from Valencia striker Jonas.

But he did sting the fingers of Diego Alves 10 minutes from time on a humid winter evening in Doha with a shot the Brazilian goalkeeper acrobatically pushed away.

Hassan showed in the final minute of regulation time that even the most capped footballers in the world are fallible as his corner kick flew straight out of play.

The 1.77-metre star with swarthy looks that would fit comfortbly into a movie set stressed before the debut of American Bob Bradley as coach of the Pharaohs that he did not want "sympathy" caps.

"My performances with Zamalek should determine whether or not I play for the national team," he told reporters ahead of a friendly originally scheduled for Cairo last September but postponed over security concerns.

"While thanking those who say I should be included in the national team to achieve a personal goal, I believe that decision must be based only on my performances at club level."

It is unclear when Hassan will have a chance to break the record as Egypt are likely to play warm-up matches ahead of a 2013 Africa Cup of Nations qualifier against Central African Republic scheduled for the first half of next year.

Former USA coach Bradley has set his sights on taking Egypt to the 2014 World Cup in Brazil and the first group fixture is at home next June against the winners of a preliminary tie between Mozambique and the Comoros Islands.

Hassan was part of the 1998, 2006, 2008 and 2010 Cup of Nations-winning teams and was named MVP (most valuable player) at two of those African flagship football tournaments.