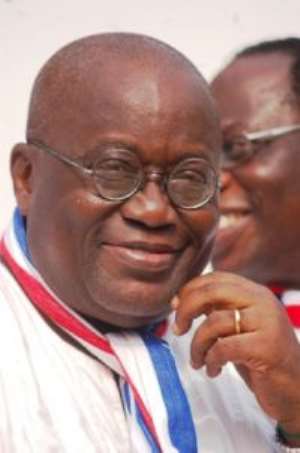 The attention of the Office of Nana Akufo-Addo has been drawn to another story in the Daily Post about the 2012 Presidential Candidate of the New Patriotic Party, which is remarkable for its absolute creativity and total disregard for the key journalistic ingredient called, truth. This is a story baked in the dilapidating kitchen of falsehood and served on the cracked plate of malicious assassination of character.

The paper reports that Nana Akufo-Addo "refused to submit himself to the necessary security checks at the Kotoka International Airport on his way to London" Tuesday night.

That is a total lie. Nana Akufo-Addo, as always, went through the normal security procedures at the Kotoka International Airport Tuesday night, like he does at any other international airport anywhere in the world. He was searched, including a physical body search at the KIA last Tuesday. It is also not true that he gave any money to any official at the airport as reported.

Is it not ironic that the same story that admits that since 2009, Nana Akufo-Addo has not used the VIP lounge, with all its privileges, and has been submitting himself instead to the same procedures like any ordinary traveler from Accra, can turn around to accuse the same man of inventing a special privilege for himself?

We will neither ask for an apology nor retraction from a paper situated deep in the partisan stable of the ruling party and dedicated to publishing false stories on our 2012 presidential candidate. We will rather appeal to the general public to, once again, ignore this false story for what it is not worth. Ghanaians want practical remedies to the ailing Better Ghana Agenda and not practical, ugly jokes thrown in the public arena in the forlorn hope of diverting attention from the crass incompetence, economic hardships and growing unemployment being endured under this current administration.