Citrus farmers call for the establishment of a Marketing Board 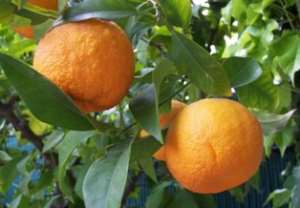 Cape Coast, Nov.13, GNA - The Cape Coast Citrus Farmers Cooperative Society Limited (CCFCSL) has called for the establishment of a Marketing Board to enhance the development and promotion of the Citrus and Lime sectors in the country.

They said the Board when established would be primarily concerned with the production, harvesting, packaging, processing and marketing of all citrus varieties in the central region and all citrus growing areas in the country.

Mr Ato Van-Ess, a trainer of Business Sector Advocacy Challenge Fund, made the appeal on behalf of the Society during a workshop to address capacity gaps in accessing citrus and lime in Cape Coast.

Mr Van-Ess said following the outcome of a study conducted by BUSAC FUND, it was imperative for the establishment of a Board because citrus farmers faced immense market access challenges such as limited markets and extremely low prices for the produce and that some farmers had even cut down their orange trees and deserted citrus farming.

He said with more than 10,000 farmers who are mostly smallholders, the citrus industry was estimated to be the largest in Ghana and due to the market problems only about 50 per cent of orange was sold to the market.

Mr Van-Ess said as in the case of COCOBOD, which is the board overseeing all cocoa activities and polices in the country, the ministry of Food and Agriculture should put in place a similar board to streamline all citrus farming activities, this he noted would improve the negotiating powers of the farmers and go a long way to empower them in the citrus industry.

Mr Henry Fordjour, the Abura-Asebu-Kwamankese District Director of Agriculture, called for the formation of farmer cooperatives and coalition and urged all citrus farmers to join the society to enable them have a formidable force.

Mr Fordjour expressed concern that government's interventions for farmers was only in the areas of cocoa, rubber, oil palm with citrus and mango not receiving any support from the government.

He said disease and pest control as well as the lack of farm maintenance was the major problems facing citrus and lime farmers in the region and urged them to develop farm maintenance skills to help improve upon their farm yield.

Mrs Victoria Dansoa Abankwa, Cape Coast Metropolitan Director of the Ministry of Agriculture who presided over the function, advised citrus farmers to see their farming activity as a business and in put in place all the indicators that would make the business viable and sustainable.

She urged them to embark on group formation to enable them forge ahead with their work and also endeavour to adhere to the advice of agric extension officers to improve upon their farms.

Mr Paul Ainoo, chairman of the Society, commended the BUSAC FUND for the workshop stressing that it was a wakeup call for them to organise themselves and fight for the establishment of a board which would help address their marketing needs.