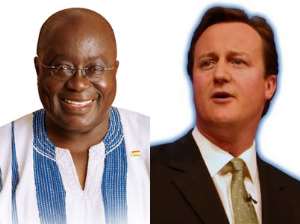 Nana Akufo-Addo was in London for the two-day (November 10-11, 2011) 11th Party Leaders' Meeting of the International Democrat Union (IDU), hosted by the UK Conservative Party.

At the special meeting between the two political leaders, which took place at No. 10 Downing Street, the Prime Minister and the Presidential Candidate discussed the need for peaceful, free and fair elections in Ghana and the recent announcement by the British Premier, threatening to withhold UK aid from governments that do not reform legislation banning homosexuality.

On elections in Ghana, the Prime Minister took the opportunity to congratulate Nana Akufo-Addo and the NPP for the 2008 presidential election in Ghana, which he acknowledged Nana Akufo-Addo lost but by “hairsbreadth”.

He said, “It must have been painful for you and your party”, adding, however, the smooth and peaceful transition in Ghana in 2008 signified a significant progress for the process of democratic transition in Africa. “You are a great example for democracy. Best of luck next time,” Mr Cameron said to his guest from Ghana.

Nana Akufo-Addo used the opportunity in London to appeal to the UK and the international community, in general, to take a keen interest in Ghana's 2012 general elections, beginning with the ongoing process of compiling a credible biometric voters' list to tackle multiple registration and the campaign, being led by his own party, to have a biometric verification system at the polling station as a key tool for tackling the more serious problem of multiple voting.

On the issue of linking the promotion of gay rights to British development assistance, Nana Akufo-Addo made it clear to the British Prime Minister that Mr Cameron's statement did not go down well with the Ghanaian public, who saw it as an affront to their social values.

The leader of Ghana's main opposition party, therefore, cautioned, “I think we should be careful not to be seen to be imposing British values on another sovereign state.”

In response, Prime Minister David Cameron showed appreciation to the sentiments expressed by the flagbearer of the NPP.

In his defence, however, the Prime Minister said that his decision to link the promotion of gay rights to international aid was in response to the sentiments of the British people.

Addressing the IDU party leaders conference Friday, Nana Akufo-Addo warned against a one-size-fits-all kind of democracy, calling, instead, for a more democratic understanding of democracy, which encourages greater flexibility and sensitivity to the social values of a people.

According to him, “democracy is successful where it enjoys domestic ownership. It must not be seen as in imported governance culture, even though its values are of universal validity.”

Referring to the Arab Spring, the NPP flagbearer said, “The current wave of democracy in the Arab world will, no doubt, add its own rich contribution to the process. “

In his conference speech, British Foreign Secretary, William Hague, MP, also stressed the need to allow democracy to develop in line with the values of a society.

He said what was good about centre-right or conservative parties across the world, as opposed to left wing parties, was that “we are different from each other because we are based on the traditions and values of each country. We adapt to survive.”

The IDU, which has a global membership of some 81 political parties, was formed in London in 1983, when British Prime, Minister Margaret Thatcher, US President, George Bush Snr, and German Chancellor, Helmut Kohl came together to form a group of centre-right parties united around a common set of values, including a belief in individual liberty, institutions which guarantee the rule of law, and the free market.

NPP was the first full-fledged IDU member from Africa. 51 party leaders from all the continents attended last week's conference, which was addressed by world leaders.