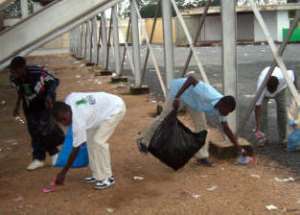 The competition, which is aimed at providing good sanitation in communities in the New Juaben Municipality, would be organized among three schools in the Oyoko community, near Koforidua.

Mr Asumadu said this to the GNA during a three-day workshop on Water and Sanitation adding that the secretariat would sell all the collected plastic waste from the three selected schools every month and return the money to the schools which would be used to purchase disinfectants and sanitations tools for the schools.

Mr Asumadu said schools, which collected more of the plastic waste would be awarded annually with useful prizes.

He said the measure was aimed at creating awareness on how important it was to keep the environment clean and to help prevent the outbreak of diseases such as cholera.

Mr Asumadu earlier at the opening of the workshop said the participants were being trained as peer educators to enable them hold weekly meetings in schools and communities to sensitize them on good habits.