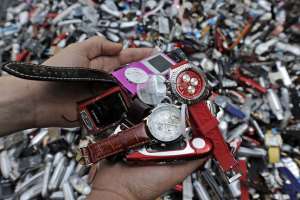 Mombasa, Kenya, Nov. 3, GNA - The global economic value of counterfeited and pirated products was estimated at 650 billion dollars in 2008, according to a 2011 report conducted by the Business Action to Stop Counterfeiting and Piracy.

The objective of the workshop is to spread a better understanding of Intellectual Property (IP) rights among the relevant audiences and to raise public awareness about the health and safety risks associated with buying counterfeit products.

The WIPO organised the workshop in cooperation with the United States Department of State with assistance from the Anti-Counterfeit Agency of Kenya.

The document also expressed fears that if the global trend was not addressed immediately the global economy would be worst hit with a greater loss of over 1.7 trillion dollarsby the year 2015.

Most of such products counterfeited and pirated are the fast moving consumer goods with high margins such as soap and detergents, food and alcoholic beverages, dry cell batteries, pens and branded stationeries, motorable spare parts and drugs among others.

The report said counterfeiting had economic, social and political ramification since governments lost a lot of revenue from counterfeit and pirated goods through tax evasion, loss of jobs due to relocation of industries or job cuts and loss of sales revenue for entrepreneurs of genuine products.

According to the report, counterfeit and pirated products had negative effects on consumers and also discourage creativity while politically it reduced foreign direct investments as well as frustrating long-term government policies.

In efforts to rid the world economy of the menace, participants at the workshop advocated for special courts to provide speedy enforcement and prosecution of counterfeiters and pirates.

Giving the WIPO tools and consumer attitudes and perceptions as a way out on the challenges faced in the war against counterfeit products, Mr. Omar Katbi, Head of Outreach Action Plan of WIPO stressed the need for outreach campaigns, which should be changed and packed well to influence the behaviour of a target audience.

He said an anti-counterfeiting campaign was considered successful only if people stopped buying counterfeit goods.

He observed that the role of the media in creating awareness campaign to the people was a paramount strategy WIPO and its drive to reach out to sensitize the consumers.

He called for adequate training of the media to be well equipped to disseminate the messages across to consumers.

Mr Stephen Mallowah, Executive Anti-Counterfeit Agency of Kenya, suggested the establishment of prosecutors for all the agencies involved in the fight against counterfeiting, piracy, manufacturers and importers of fake and sub-standard products.

He said there was the need for special courts for the effective enforcement of the fight against perpetrators and to ensure speedy prosecution of culprits, saying: “Our law enforcement agencies need to go beyond seizure and burning of pirated goods if we want to succeed in the fight against counterfeiting and piracy”.

He said consumers of such counterfeited and pirated products needed to also understand that “cheap things are costly very expensive”' and that buying things supposed to cost a higher amount at very cheap price should strike that it was a fake commodity.

She blamed the Chinese products on the markets and the domineering effect of the Asian economic influence for the progression of the trend.

She said the affected countries lost huge revenues as a result of the practice which she described as not only economic sabotage but also an organized crime against the affected states.