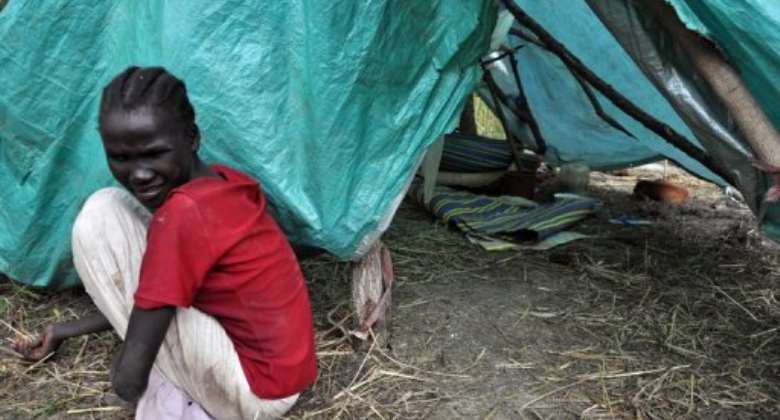 Conflict in Blue Nile has raged since September. By Hannah Mcneish (AFP/File)

JUBA (AFP) - Sudanese government forces and militias are "killing and raping civilians in Blue Nile state" as they flee violence and bombing, a human rights watchdog said on Tuesday.

The Enough Project, a group backed by Hollywood star George Clooney, repeated calls for further investigation into alleged atrocities and for humanitarian access to the southern state where conflict has raged since September.

While many flee across the border for fear of Antonov bombers, "some Blue Nile residents also reported that government forces were targeting, killing, and raping civilians," it said in a statement.

The report came after members of the group visited the Sherkole refugee camp in Ethiopia, which almost 29,000 people have fled to, and the town of Kurmuk which straddles the border with Sudan.

"Soldiers with small arms were chasing the civilians," the group quoted one refugee from the town of Um Darfa as saying.

"They were supported by the Fellata (an ethnic group in Blue Nile), who captured some of the civilians and slaughtered people," including women and children, said the refugee.

Amanda Hsiao of the Enough Project said the "stories provide only a glimpse into the civilian impact" of the conflict in Blue Nile state.

"They underscore the need for a comprehensive investigation into the alleged atrocities as well as international humanitarian access into the area, especially as ground combat intensifies with the end of the rainy season."

Enough Project researcher Omer Ismail said there was a "huge need" for an operation to deliver aid across the border to "victims of attacks by the government of Sudan on its own people in Blue Nile state and South Kordofan."

"Being there at the border and hearing the shelling and Antonov bombing while talking to the very refugees who fled the violence is quite compelling," he was quoted as saying in the statement.

The group reported other claims that militias were sent to flush out tens of thousands of people hiding in Blue Nile's hillsides, and had detained and abused women, leading to the death of two young women from mass rape.

It echoed rebel claims Sudan was "targeting the civilian areas," and documented testimonies from Blue Nile residents that claimed the killing was targeted along ethnic lines by mainly Arab militia.

The reports cannot be independently verified as Sudan has blocked aid agencies from operating in war-torn Blue Nile and neighbouring South Kordofan, Sudan's only oil-producing state.

A spokesman for Sudan's government could not be reached for immediate comment.

Since fighting erupted in Blue Nile in September, a total of 28,700 people have fled the border state to Ethiopia, according to the UN High Commissioner for Refugees.

"Aerial bombings in Sudan's Blue Nile state are driving a new wave of refugees into Ethiopia", which are mostly women, children and the elderly, the UNHCR said.

Khartoum is engaged in military operations against rebels in three regions along Sudan's volatile border with South Sudan, which gained full independence on July 9.

On Monday, local governor Ahmed Haroun said hundreds of rebels in South Kordofan were killed in clashes with the Sudanese army in an attack on the town of Teludi.

The conflict in South Kordofan state erupted weeks before southern secession between the Sudanese army and Nuba militiamen, who formerly fought alongside the SPLA, the former rebel army of the south, during their decades-long war with the north.

The fighting spilled into nearby Blue Nile state as the government moved to assert its authority within its new borders and drove out forces formerly loyal to the SPLA after a botched attempt at disarmament.

The Enough Project reports other refugees saying that conflict was sparked by Khartoum's attempts to further marginalise restive southern states and manipulate a process laid out under a 2005 peace agreement with the South that allowed both southern regions a greater voice in their dealings with Sudan's government.

MoMo transaction value for April declines by GH₵2.8billion
20 minutes ago