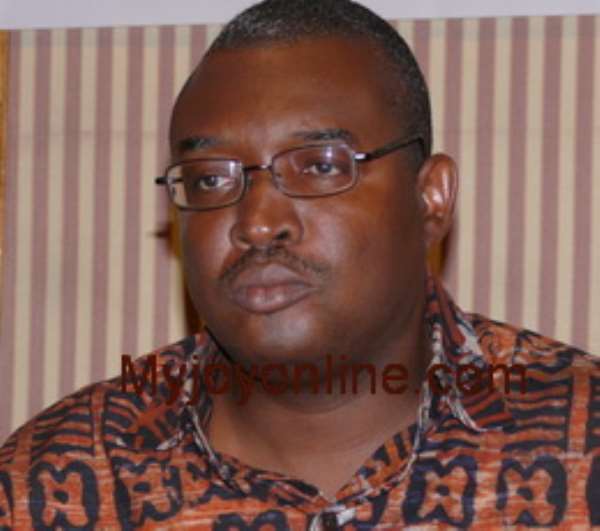 The mass media has been inundated with reports of the Deputy Minister of Interior, Kobby Acheampong ordering the lock-up of seven (7) police officials for daring to call him 'stupid'

According to the reports, the Hon. Deputy Minister who was recently in the news for verbally attacking a female TV show hostess, was in a traffic which had built because of a police roadblock meant to check over speeding. The report indicates that Kobby who was behind some cars also in the traffic carelessly overtook them at neck-breaking speed with every intention of bypassing the roadblock. When he was stopped at the checkpoint, he told the police officers there that he was of the opinion that the location of their roadblock was dangerous and so had decided to by-pass the other cars to offer them that advice. Obviously infuriated by this act of pomposity from the bespectacled 'boy' the police officer, not knowing that 'this small boy' is the boss of his boss the IGP called the Hon. Deputy Minister, stupid.

Kobby Acheampong has so far corroborated these reports. I heard him on air saying that he bypassed the other cars in his capacity as Deputy Minister of Interior, to point out to the police, the dangers associated with mounting a roadblock in a valley, on a major road. According to Kobby, one of the officers at the checkpoint was rude him, calling him stupid. This really angered Kobby, compelling him to call his subordinate the IGP, who is boss of all of the country's police officers to teach his boys some manners, leading to their incarceration. The Deputy Minister however denied he was over speeding, explaining that the speed guns his Ministry provided the Ghana Police Service are not functioning to standard.

There have been various reactions from sections of the public to this piece of news. Many are those who have expressed surprise at Kobby taking offence to being insulted considering as they put it, “it is food he eats everyday”. Others described his actions as “tiri mu dє” to wit over-pampering and pompousity while some simply said he is “too known”. There was however the general consensus that if there is any disrespect being shown Kobby and his colleagues, it is only commensurate with the way they have been handling themselves since assuming political office.

I am of the opinion, without a shred of doubt that it was absolutely wrong, careless and infact very stupid for Kobby Acheampong to have engaged in this reckless act just to prove that he is a deputy minister in the Mills administration. Instead of sitting in the office to supervise in the planning and implementation of policies and programmes which will enhance the performance and working conditions of our security agencies he is over-speeding up and down to places of tourist interest.

Traveling on the Accra Cape Coast road, one will see road signs mounted by transport experts at various points indicating speed limits and other road warning signs. One will also not fail to see mounted notices indicating numbers of people who have died at various sections of the road, especially around curves and valleys, obviously because motorists are not heeding these road signs. Common sense tells us that the presence of the police at these points on the Accra-Cape Coast road will definitely reduce the incidence of road indiscipline, thereby saving lives. Common sense also tells us that should the police mount a roadblock at a point where over-speeding motorists will see them from a long distance, they will only reduce speed, pass the check point within the speed limit then go back to their over speeding ways. What will the Police have achieved then? The location of the police checkpoint in question is dangerous only if you are over-speeding, and that is exactly what they are there to check. And by the way, who deceived Kobby Acheampong into believing that superiority in an organization as a result of political appointment is tantamount to technical competence? The Deputy Minister of Interior should know that it is not for nothing that there are specialized units in the police service of which the MTTU is one, whose officers have been trained to undertake specific duties and have gained a wealth of experience doing that? Is Kobby telling us that because he is a Deputy Minister for Interior, he knows better than officers of the MTTU, where to mount roadblocks?

Let us not loose sight of the fact that because of this 'too known' attitude of Kobby, that dangerous part of the road, which was being manned by police officers, had to be abandoned. Oh yes. Kobby by his irresponsible act of showing the MTTU officers where power lies succeeded in having his subordinate the IGP do his bidding by locking the police officers up at the police headquarters, leaving this dangerous section of the road unmanned and abandoned, waiting to devour innocent lives.

One of the campaign promises the NDC rode on to power was the auditing of the Accra-Cape Coast road followed by reconstructing portions, which are dangerous and accident-prone. That has not been done. Yet when personnel of the MTTU at the peril of their lives mount roadblocks to save lives, some 'tiri mu dє' boy causes their arrest.

One only has to google search 'Kobby Acheampong' and you will wonder by the first 8 results whether the owner of that name is qualified to hold the position of Deputy Minister of the Interior. Indeed you will wonder by the profile of this 'boy' whether President John Atta Mills is really in the serious business of putting in place policies and programmes to better the lives of Ghanaians in the various areas including the high spate of accidents and armed robbery on our roads. This is a boy who has become notorious for all the bad things associated with being in political power: gross disrespect for the elderly, uncouthness, lack of analytical capabilities (just like his boss the President) and as some have recently hinted, sexual misconduct in the form of homosexuality. He is on record to have insulted political figures whose achievements he can only dream of aspiring to, and is ranked among the President's top five hopeless appointees. He is also reputed to be highly verbally abusive of women. We all remember how he insulted NPP's Ursula Owusu, and recently, Metro TV and Citi FM's Shamima Muslim. He is considered very petty, quarrelsome, and a gossip, traits experts say are often associated with homosexuals. As an academically qualified communicator he is reputed to have very poor relations with the media fraternity, insulting anyone who disagrees with him. He was dismissed as a lecturer at the African Institute of Communication because of improper conduct.

Fellow Ghanaians, for mounting a roadblock in a dangerous valley on the Accra-Cape Coast road to check over speeding, for daring to call Kobby Acheampong stupid because he was over speeding, carelessly overtook some vehicles thereby endangering the lives of other road users; for daring to point out to Kobby Acheampong that he was not in the best of positions to teach them how to do their jobs, seven (7) officers of the Ghana Police Service, MTTU division have been incarcerated at the Police headquarters. No wonder police officers are unable to put to check unruly NDC foot soldiers.

By the way where is Kobby's boss the Minister of Interior Dr. Benjamin Kunbuor? I know him to be a no-nonsense man and an honourable politician who does not take his job lightly. Won't he come out to publicly reprimand his small boy? Does he not recognize the extent to which the irresponsible actions of his 'boy' will have on the “vim and vigour” of the Ghana Police Service? Or is he in agreement? As for President Mills diє, I know he will say nothing, neither will his Chief of Staff.

Believe me, when you hear or see Kobby Acheampong and his colleagues say what they say and do what they do without being reprimanded by any higher authority, do not be surprised. It is part of their official job description as contained in their personal appointment letters. No wonder, “so so foolish talk nkwaah. Them a head dey sweet dem keke”.