Kenya to give Maathai state funeral 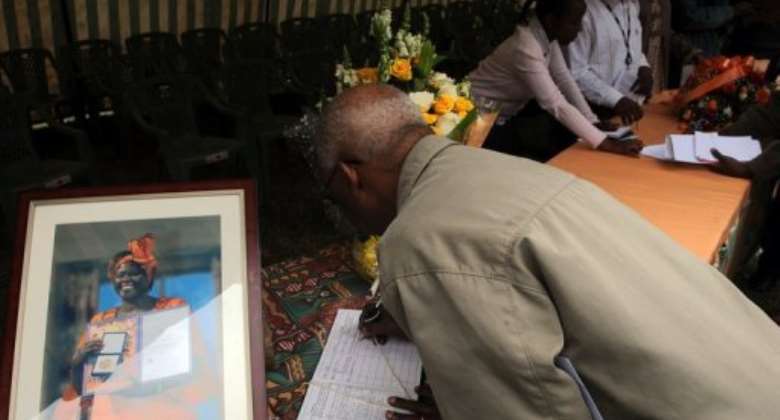 A Kenyan signs a condolence book for Wangari Maathai, who died of cancer on Sunday. By Simon Maina (AFP)

Kibaki said the flag will fly at half mast on Thursday and Friday to honour Maathai, an environmental activist who in 2004 became the first African woman to be awarded the Nobel peace prize.

"Wangari Maathai will be accorded a state funeral," Kibaki said in a statement, which did not give a burial date.

In Kenya, Maathai, who died on Sunday of cancer, was renowned for famously coming out against former authoritarian president Daniel arap Moi's plans to build a skyscraper at a park in central Nairobi and grab a forest near the city centre.

She also joined movements in the 1980s and 1990s to press for political and democratic freedoms stifled under Moi's regime.

On Tuesday, Maathai's family said they were considering alternatives to a wooden coffin to bury the environmentalist who opposed chopping trees to make caskets.

"She was one of those who did say that we better think of something else besides cutting down trees for caskets so we will try to circumvent using wooden coffins," family spokeswoman Vertistine Mbaya told reporters.